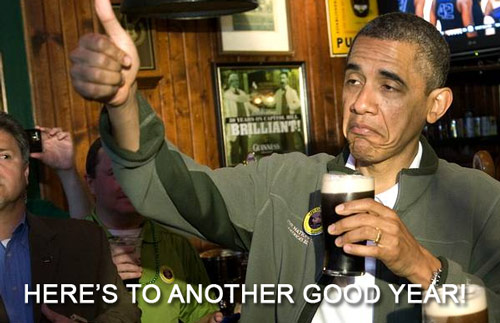 In a speech at Ivy Tech Community Collage in Indiana President Obama couldn’t have been more proud of the work he’s accomplished over the last several years. Citing official statistics like lower deficits and higher employment he says that 2015 is going to be a another good year.

If there were ever a contra-indicator for how the state of the union will be now that the “shadow of crisis has passed,” this is it:

We’ve come a long way these past six years, since we suffered the worst financial crisis since the great depression.

This morning we found out that America’s businesses added another 267,000 jobs. In 2014 our economy created more than 3.1 million jobs and that’s the best year of job growth since the 1990′s. So all told, over the past 59 months the private sector has added about 11.8 million jobs. That’s the longest streak of private sector job growth in our history.

Meanwhile, our deficits are shrinking… they’ve gone down by about two-thirds. Our dropout rates are down… Our graduation rates are up. We’re as free of foreign oil as we’ve been in 30 years… We’ve doubled the amount of clean energy that we’re producing… A lot of families are saving a lot of money at the gas pump, which is putting some smiles on folks’ faces.

And in the single most hopeful sign for middle class families, wages are starting to go up again.

So, America is poised for another good year.

While it’s easy to pick and choose stats and present them to college students and faculty whose heads couldn’t stop bobbling in agreement, the reality is starkly different from what President Obama has suggested is the case.

As a basic example of the outright conjecture being spewed by our Commander-In-Chief, consider the claim that 3.1 million jobs were created last year. Karl Denninger blows that completely out of the water and shows just why these cherry-picked statistics only tell part of the story: This change in the working-age population, by the way, means the net job gains are now effectively zero over the last year; the entire last year’s gain is now only 218,000 jobs!

Last month’s household employed number looked to be headed southbound, as did the previous month. Well, now it’s strongly negative, but what’s worse is that it’s now negative on the household number three months running and at an increasing rate

This is a crap report; all of the so-called “improvement” was due to outright lying via “seasonal adjustment” and what’s worse is that the BLS is now admitting that we put 600,000+ more people into the working age population group last year, almost certainly via illegal immigration, than is normal for a given year.

While Americans’ wages did increase a supposed 2.2% in the past year, and the mainstream media claims that this increase stayed ahead of official inflation, the facts tell a slightly different story.

According to shadowstats.com, the real inflation rate over the last year if we don’t use the government’s fuzzy math is actually closer to about 4.2%. Thus, while President Obama claims rising wages are the single most hopeful sign for the middle class, what he failed to mention is that we actually lost about 2% of our purchasing power to monetary expansion.

The notion that people now have all this extra money in their pockets because of lower gas prices is likewise laughable. Sure, prices dropped, but according to recent reports it means that hundreds of thousands of jobs are now at risk. Oil related businesses are laying people off and some are facing bankruptcy because of leveraged bets that have now gone horribly wrong. Should gas prices stay low for much longer there is a distinct possibility that all of President Obama’s purported job growth could be wiped out in one fell swoop.

Furthermore, the last thing that Americans have on their faces right now are smiles, because those paltry gas savings that amount to roughly $600 per year are nothing compared to the massive premiums and penalties associated with the forced mandates wrought by Obamacare: Are we all supposed to clap and thank the President for the $50 we save a month without considering the “affordable” rates we are now forced to pay for health care; rates that for many families exceed $1000 in monthly premiums on top of deductibles of $5000 or more?

Moreover, if things are going so great right now in America, how is it that fully 19.8% of American households were dependent on the government to put food on their tables in 2014? Last but not least, on the matter of deficits, it’s great that we’ve reduced those over the last couple of years. But what about this gigantic elephant in the room? That’s $18.1 Trillion in debt and in the amount of time it took you to review this article we added about $2 million bucks to the tab.

If by “being poised for another good year” the President means we’re going to see our money lose purchasing power, fewer people in the workforce as a percentage of the population, a continued increase in our national debt, more defaults on student loans, and rising prices for food, energy and healthcare, then yes, you’d better get ready for the next Big (Ka)Boom!

And by get ready, we mean you’d better have a preparedness plan that includes emergency cash, reserve food storage, essential supplies, and self defense armaments because when people realize just how “great” things are it’s going to get crazy.