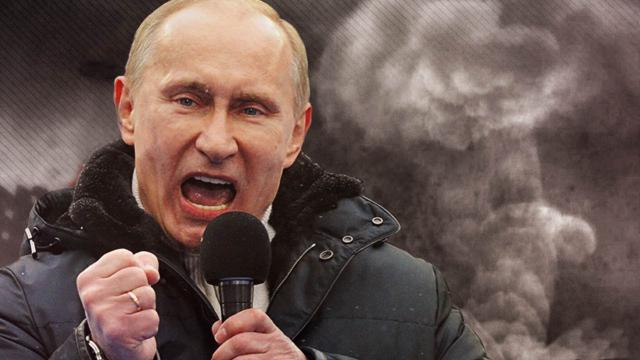 Russia is ordering all of its officials to fly home any relatives living abroad amid heightened tensions over the prospect of global war, it has been claimed.
Politicians and high-ranking figures are said to have received a warning from president Vladimir Putin to bring their loved-ones home to the ‘Motherland’, according to local media.
It comes after Putin cancelled a planned visit to France amid a furious row over Moscow’s role in the Syrian conflict and just days after it emerged the Kremlin had moved nuclear-capable missiles near to the Polish border. Former Soviet leader Mikhail Gorbachev has also warned that the world is at a ‘dangerous point’ due to rising tensions between Russia and the US. According to the Daily Star, administration staff, regional administrators, lawmakers of all levels and employees of public corporations have been ordered to take their children out of foreign schools immediately. Failure to act will see officials jeopardising their chances of promotion, local media has reported.

The exact reason for the order is not yet clear

But Russian political analyst Stanislav Belkovsky is quoted by the Daily Star as saying: ‘This is all part of the package of measures to prepare elites to some ‘big war’.’ Relations between Russia and the US are at their lowest since the Cold War and have soured in recent days after Washington pulled the plug on Syria talks and accused Russia of hacking attacks.

The Kremlin has also suspended a series of nuclear pacts, including a symbolic cooperation deal to cut stocks of weapons-grade plutonium. Just days ago, it was reported that Russia had moved nuclear-capable missiles near to the Polish border as tensions escalated between the world’s largest nation and the West. The Iskander missiles sent to Kaliningrad, a Russian enclave on the Baltic Sea between Nato members Poland and Lithuania, are now within range of major Western cities including Berlin.
Polish officials – whose capital Warsaw is potentially threatened – have described the move as of the ‘highest concern’. Putin’s decision to cancel his Paris visit came a day after French President Francois Hollande said Syrian forces had committed a ‘war crime’ in the battered city of Aleppo with the support of Russian air strikes. Putin had been due in Paris on October 19 to inaugurate a spiritual centre at a new Russian Orthodox church near the Eiffel Tower, but Hollande had insisted his Russian counterpart also took part in talks with him about Syria.
The unprecedented cancellation of a visit so close to being finalised is a ‘serious step… reminiscent of the Cold War’, said Russian foreign policy analyst Fyodor Lukyanov. ‘This is part of the broader escalation in the tensions between Russia and the West, and Russia and NATO,’ he told AFP. The Kremlin has also been angered over the banning of the Russian Paralympic team from the Rio Olympics amid claims of state-sponsored doping of its athletes.

Meanwhile, the top advisor to US presidential candidate Hillary Clinton has said the FBI is investigating Russia’s possible role in hacking thousands of his personal emails. But Russian officials have vigorously rejected accusations of meddling in the US presidential elections and dismissed allegations that Moscow was behind a series of recent hacks on US institutions. Retired Russian Lt. Gen. Evgeny Buzhinsky told the BBC: ‘Of course there is a reaction. As far as Russia sees it, as Putin sees it, it is full-scale confrontation on all fronts.
If you want a confrontation, you’ll get one. ‘But it won’t be a confrontation that doesn’t harm the interests of the United States. You want a confrontation, you’ll get one everywhere.’ Earlier this week British Foreign Secretary Boris Johnson waded into the row, calling for anti-war campaigners to protest outside the Russian embassy in London.
Johnson said the ‘wells of outrage are growing exhausted’ and anti-war groups were not expressing sufficient outrage at the conflict in Aleppo.
‘Where is the Stop the War Coalition at the moment? Where are they?’ he said during a parliamentary debate ( via theearthchild.co.za ).
Meanwhile, it is a busy strategic morning in Russia, ICBM launch expected from Plesetsk, USAF RC-135S COBRA BALL watching it:

Putin Strikes Back: Russia Cuts Off European Gas Supplies, Starts Selling Dollars: “The Decision Has Been Made”