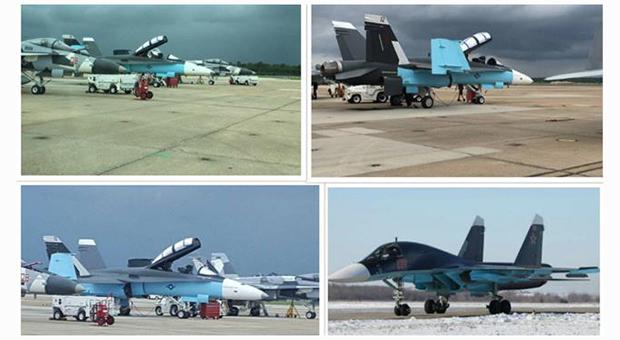 Canadian journalist discovers US fighter jets mocked up to look like Russian planes. Relations between the United States and Russia have grown increasingly tense over the past few years with Russia coming under heavy criticism for the conduct of its military in the war-torn region of Syria and the annexation of the disputed territories in the Ukraine. Recently, the United States military has ramped up its bellicose rhetoric against the Russian Federation leading many to fear that war between these two powerful nations is imminent.

These modified planes speak to a deepening crisis

Now pictures captured by a Canadian journalist seem to add weight to the fears that the United States is gearing up for a military confrontation with Russia. These photographs appear to show US-built F/A-18 fighter jets painted with the blue patterns that are displayed on vehicles affiliated with the Russian army.
The journalist himself noted that it is quite common for countries all over the world to modify their planes in this way for use in training exercises. If this scenario is true, then it is likely that these planes would be used to act as aggressor squadrons employing similar tactics to the Russian military to prepare soldiers for battle against the real Russian army.
That the United States are seriously preparing their troops to face Russian soldiers in the future should be a cause for alarm in and of itself. However, some people believe that there is something even more sinister afoot. Some have speculated that the United States military has modified the planes in this way in order to launch a false flag attack either in the United States or somewhere else in the world. A false flag attack that pins responsibility to the Russian military at this time could be used as the justification for a full-scale military assault on the country. In either case, these modified planes speak to a deepening crisis emerging over US-Russian relations which could bode ill for the people of both countries.