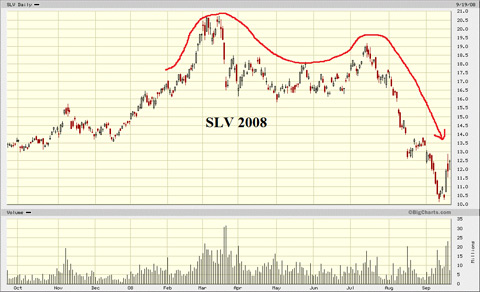 With all of the variables in play it is impossible to predict the exact moment of the triggering event that will lead to the next stock market crash. But every so often a blaring red siren pops up that is worthy of our attention.

Trend analyst and stock trader Greg Mannarino of Trader’s Choice may have just spotted such a signal. He calls it a possible “banker’s tell” that may be giving us advance warning of a coming market event that could lead to the crash many observers expect is inevitable.

The following two charts show the price for the SLV silver Exchange Traded Fund from just before the crash in 2008 compared to what it looked like over the last six months. As he notes in his recent interview with Greg Hunter’s USA Watch Dog, the pattern similarity is uncanny.

We’re seeing almost identical price action with regard to silver that we saw one month prior to the crash of Lehman Brothers in 2008. That means something may be lurking here on the horizon.

Is history going to repeat itself again? We understand there’s a lot of shady things going on here, so anything can happen here. Within weeks of this pattern developing in 2008 we saw one of the largest market crashes in American history, as depicted by the following chart: To be clear Mannarino himself suggests that, given the heavy monetary machinations from the Federal Reserve, there is a strong probability that stock markets will continue to soar to record highs for the time being as the Federal Reserve and their European central banking counterparts continue to pump money into the system with reckless abandon.

But, as we all know, nothing lasts forever.

Whether the stock market crashes in the near future or not, what we know is that the Fed will continue to debase our currency. This will lead to higher prices for key resources like food and energy, and a continued impoverishment of Main Street. In the end, so much wealth will have been taken from the American people through inflation that there will be nothing left to fuel the economy and the inevitable crash will be upon us.

But for now, there may still be an opportunity to protect your personal wealth and even grow it.

In the following interview with Greg Hunter, Mannarino notes that the latest drop in silver may be one of the few instances in our lifetimes that we’ll see silver priced lower than it costs to get it out of the ground.

Right now… we are well below the all-in production cost of physical silver. What does this mean?

Honestly, this has to be the greatest opportunity as an investment vehicle – silver – in the history of the world. How anyone cannot understand why this is a great opportunity right now is beyond me.

If you can get any asset – I don’t care what it is – below production cost… a car or a house… you should jump all over it.

Watch the full interview with USA Watchdog and Greg Mannarino as he discusses market manipulation, developing trends and the real possibility of a global war being the end result:

The current silver spot price is hovering around $17.50, a significant drop from it’s recent highs a few years when it topped $50 per ounce. Perhaps, as Greg Mannarino notes, “it’s time to jump all over it.”

We know a crisis of epic proportions is on its way. And, as history has showed, when the people lose confidence in their government and traditional investments collapse, precious metals become the asset class of last resort. This may well be one of the last times that we’ll see silver at under $20 for quite a while – perhaps until a new currency system is introduced after the dollar has been wiped out.