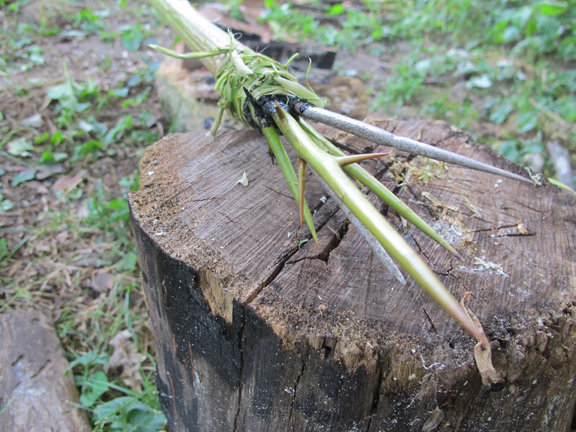 I have a friend who makes a living selling items at flea-markets, fairs and festivals and he always says to me, “The money is in the smalls.”  What he means by this is that he makes his living selling the $1 and $2 items – not the $100 big ticket items.  Of course it’s great to sell a big ticket item every now and then but if he depended on big ticket sales to pay the bills he’d be out of business.

The same is true with Survival Hunting.  It’s all about the SMALLS – the little critters like fish, frogs, snakes, cray-fish, crabs, rabbit, lizards, squirrel, mice, rat, rodents, bats, birds, turtle, possum and raccoon.  It’s easy to get caught up in the idea of a Big Game Hunt with some fancy fashioned hunting set but at the end of the day it just isn’t all that practical.  Your survival will depend on your ability to hunt, kill and eat the SMALLS.

When hunting small game, SIMPLE seems to be most effective in my experience.  One of the most effective primitive hunting tools I’ve ever used has been the GIG – especially for fish and frogs.  Don’t underestimate the ability of a simple GIG to put food on the table.  You’ve probably seen Commercial Gigs (Tridents) like the one shown below.  They are sold in the fishing section of almost any outdoor retailer. These typically come with a bolt or screw which you use to mount it to the end of a 6-10 foot pole.  They are only a few bucks.  If you don’t have one, get one.  They only weigh a few ounces and it’s a great piece of kit to have for a rainy day if you ever need it.  In this post, however, I will present you with 2 primitive survival gigs made from natural materials with limited resources.  There are literally dozens of ways to make a primitive gig but these 2 will at least get you thinking…

The name is pretty self explanatory.  The Split Gig is simply a long pole with the end split into sections which are then sharpened.  This pole can be anything from urban trash such as piece of PVC pipe to natural bamboo.  If it’s long (6′ +), fairly straight and you can split the end then it will probably work.  In my example below I used an 8 foot maple sapling. 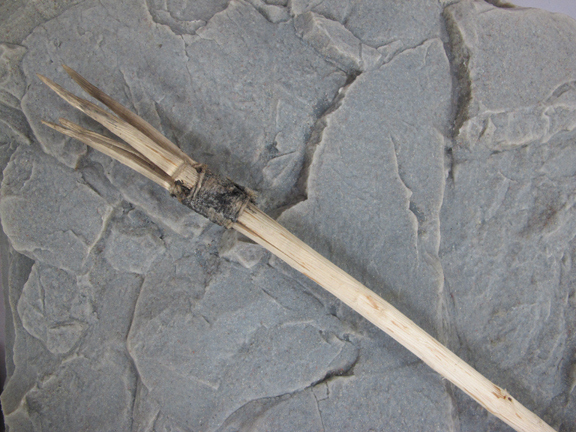 I split the end down in 4 sections about 10 inches or so.  I then wedged a small rock in the middle and drove it in with a smaller stick.  This helped to spread the ‘tines’ into the shape you see.  You could also use a small stick wedged in each split.  I then sharpened each ‘tine’ to a point. 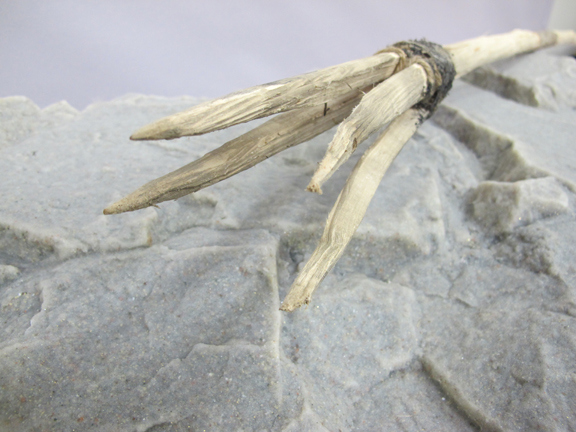 I then wrapped the base of the split with a natural fiber twine to prevent it from splitting further down the shaft.  For short-term use this isn’t necessary.  Bamboo is perfect for this kind of gig and has been used by many primitive cultures for gigging and spearing small game since the beginning of mankind.  I recently planted a small Bamboo grove at Willow Haven so that we can harvest Bamboo for training during our courses and a primitive Bamboo Gig will definitely be on the training menu.

Many different versions of this gig can be made, but the basic principle is the same.  It all starts with a long pole or shaft that is either hollow or that can be hollowed out at the gig-end.  In this example I have actually used a weed – to demonstrate the versatility of gig materials.  For the pole I used Giant Ragweed – often called Horseweed – which grows as a weed in most of North America.  I featured this invasive weed in a different post HERE if you want to learn more about it. In it’s maturity, Giant Ragweed is very stiff and develops a woody-like stem.  The center is pithy and can be hollowed out with little effort. 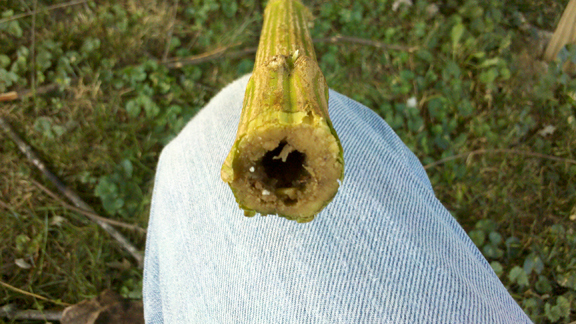 Next, the idea is to jam in and wedge or glue a variety of thin sharp objects that form a gigging tip.  Again – this can be almost anything from urban trash like coat hanger wire or nails to natural materials such as wood splinters or thorns.  I decided to keep things au naturale and use only natural found materials.  I used Locust Thorns for the gig tines and pine sap/charcoal glue to hold them in place.  If you missed my post about how to make Pine Pitch Glue – you can see that HERE.   Below is a photo stream of the process: The thorn tines were rock solid once the pitch glue dried and I wrapped the end with strips of Mulberry bark.  If you don’t already know, the bark from limbs of a mulberry tree peel off in strips and makes excellent ‘quickie-cordage’. 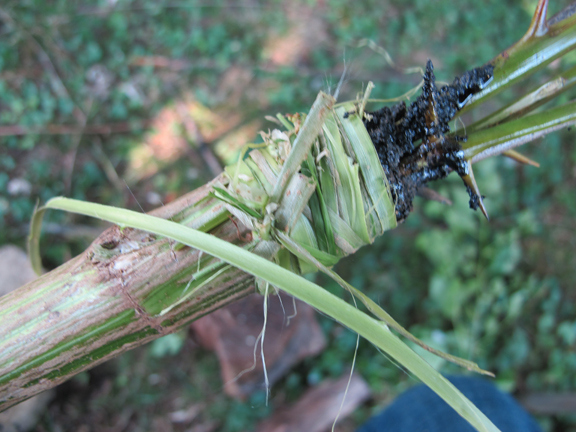 All in all, I was really happy with the result.  Not too bad for a weed, some thorns and a little bit of nature made glue.

This Gig definitely took more time and resources than a Split Tip Gig but it’s a good option none-the-less. If you’ve never used a gig, I would suggest trying it at least once simply for the experience.  Check with your local DNR office about Frog Gigging rules/regulations/season for your state.  Most states don’t allow the use of a primitive gig but using a commercial gig is good practice just in case you ever have to draw from your survival knowledge in a desperate situation.  I used a Commercial Gig for the ones below earlier this year but practiced my aim on some cattails while I was out.

I pushed on a few sections of corn cob to protect the tines (and me) while in transit. Besides survival practice, the bonus is delicious frog legs.  If you’ve never had them you are definitely missing out on one of the most overlooked delicacies in the world.

As always, tuck it away – because it’s not IF but WHEN,