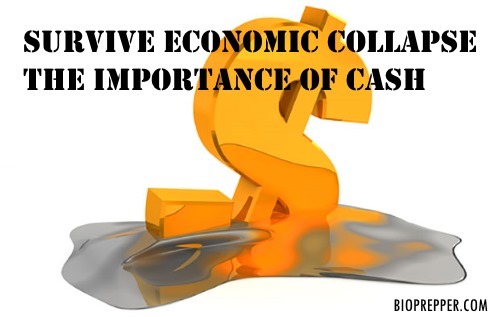 Is The World Financial System on the verge of a catastrophic failure? Respected experts say that if you know your history, the answer is a definite “Yes.” The US has been through 3 major financial upheavals in the past.
Current word events indicate that the fourth, and quite possibly the worst yet, could be just over the horizon.

A World Financial crisis of the magnitude that could be coming will be as devastating to your way of life as any Hurricane, or Earthquake – and you must be equally prepared!

What you must do immediately is move at least 10% of your net worth into gold or silver bouillon or coins, put them in your own safekeeping – not a bank vault or safety deposit box.

In the event of a full economic collapse, forget about getting your money out of a bank, and don’t think the FDIC will protect your assets, it won’t. By putting 10-20% of your savings in physical silver or gold coins, that’s a percentage of your savings that will be spared.Besides that, have at least one-month worth of expenses on hand in your home safe in cold hard cash. Yes, paper currency will be devalued very quickly during such a crisis – that is why you want your physical silver or gold. But in the very beginning, cash will be king.

Granted, in a true SHTF scenario, even cash will soon begin to lose its value as people will eventually revert back to bartering and trading of services. But what about scenarios that don’t involve a complete and extreme collapse? When it comes to dealing with natural disasters or other scenarios that might take the electronic grid down for anywhere from a few days to a few weeks, there are very real benefits to having cash readily available on hand.And you don’t have to go very far back to see this theory in action, either.
As recently as Hurricane Katrina’s devastation in New Orleans and Hurricane Sandy on the East Coast, thousands (if not millions) of people found themselves armed with nothing but useless plastic cards as electricity went down, making electronic purchases impossible. That meant that people who didn’t have cash readily available had no way of purchasing basics like food, water, or fuel. There were no reports of local merchants and grocery stores accepting hunks of gold or silver in exchange for bread and cereal.

The cash should be in small bill denominations, 20’s, 10’s, 5’s & 1’s. Stores that have supplies will not take credit cards for sure. And ATMs will be non-working, exhausted, or looted very quickly.

So what are the warning signs that the Financial Crisis is creeping up on your backdoor?

Look for lack of investments; higher interest rates; unemployment – and especially hyperinflation. If your bank starts coming up with excuses not to give you your money right away when you want to close an account, that’s usually a sign of impending collapse.

Besides the steps to protect your assets, and to have some valid currency, you MUST prepare for a Financial Meltdown, just as you would for any major natural disaster that could leave you figuratively and literally “out in the cold.”

Make sure your Bug Out Bag(s) are packed, fresh, and ready, and do the same for your Shelter- in-Place Emergency supplies. Have at least 3 weeks to one month ofstored food and supplies in place, as things could get ugly. If you have prepared a Safe House, be sure it too, is well-stocked, and consider Bugging Out to it ASAP, before things get really bad.

Economic Recovery? 13 Of The Biggest Retailers In America Are Closing Down Stores