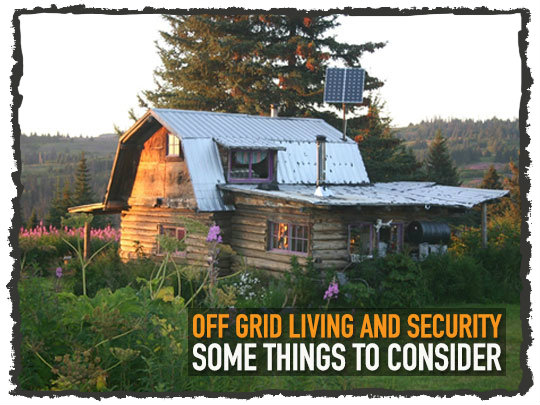 Reducing the dependency on local infrastructure, infrastructure managed by the local municipalities is the goal of many that go off grid. Anyone that has been paying attention realizes that the residents of any size city or town are at the mercy of those in charge. Cities control your water, electric, gas and even electronic communications to some extent. Taking control and going off grid however, requires work, planning, and adaptation.

Without Water Nothing Else Matters

When this country was first being settled it was a dangerous place, and so people grouped together, often times inside of forts for protection, and to protect what vital commodities they may have had such as water. Wells were typically inside the protective walls of the fort to keep them from being poisoned and/or taken over by those that may attack the fort or had the fort under siege.

Those hardly souls that may have lived outside of the fort in some cases, built their cabins close to natural springs or even diverted small streams so they ran close to, or even into the home. Water was close at hand and it was protected as best as it could be.

When the SHTF rural homes may or may not be a target, but you have to assume as the crisis draws on anyone and everyone would be a target, in particular those that have certain life essentials such as water and food sources.

You will need a well that is properly cased off so no one can poison it or disrupt the flow of water to the home. All water lines would have to be buried to a depth to where it would take considerable effort to dig them up. Pumps typically would be inside the well casement, but additional pumps may be in use outside of the well, and they need protection as well, to prevent tampering.
Power Sources

Solar, hydro and wind power is essential to those that live off grid if they expect to take advantage of electricity. However, power sources are susceptible to damage accidentally or purposefully. Your power can be disrupted, and if someone or a group is trying to force you out they will attack your power infrastructure.

Solar panels installed on the roof of the home are better protected than those mounted on poles, but they can be damaged or destroyed by small arms fire and by other means if it comes to that. Pole mounted panels can be tampered with without your knowledge if they are installed for example, near livestock water tanks that may be out of sight of the home. If you do not check every day you may not be aware of the disruption. Solar operated pumps may be used to pump water to keep the tanks topped off.

Hydro generators can be more easily concealed as long as the lines supplying the electricity to the home or other buildings are concealed. Hydro generators can be placed anywhere there is enough flowing water to turn the turbine at an acceptable rate. Hydro turbines can be placed in small ravines and crevices that are difficult to access by others provided they are even aware of a hydro power system.

Wind turbines would be extremely difficult to camouflage, but on the other hand they are not as easily tampered with. Of course with some effort your wind turbines could be destroyed. Typically a wind turbine not mounted on the roof is 20 or so feet high. The turbines can be damaged by small arms fire and by other means, and the mounting poles can be destroyed as well, but with considerable effort.

As with any city or town infrastructure it is important to everyone’s well being but it is vulnerable. It can be damaged by natural disasters, sabotaged, and it can simply malfunction.

Redundancy is important for off grid living. You need backup resources in the event of a malfunction or damage caused by any means, and you need to be able to control and protect as much as possible from within your structure.
Even if you live off the grid you need emergency supplies, and you must be able to sustain life without electricity. Some people may be under the impression that once they can generate their own electricity that they would never be without electricity.

Solar energy while becoming more popular there is still a considerable cost involved and then there is maintenance and repairs. You will need more than a working knowledge of how solar panels work so you can replace damaged ones or to make repairs. Solar panels do not last forever, and aged panels cannot produce as much as newer ones, so replacement is a very real concern.

If something happened to where you could not pump water from your well, what is your backup plan, what will you do if you lose the ability to generate electricity for a short period, or are forced to defend your home, and cannot get outside to make repairs or to gather water from other sources?

Off grid homes should have adequate storage for emergency supplies. This may mean that you have to have a basement and/or root cellar under the home or a bunker that can be accessed from within the home.

You may be forced to sustain yourself in a cellar or bunker and so it needs to be well stocked with all essentials to include an adequate water supply.

Just a cabin in the woods with some solar panels is not enough to sustain you even though you are for all intents and purposes off the grid. You still need everything that a municipality had previously supplied. However, now you are responsible for the infrastructure.

The post Off Grid Living and Security: Some Things to Consider appeared first on Preparing for shtf.

7 Tips to Keep You Alive and Found in the Wilderness