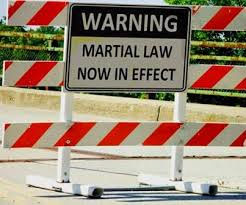 The blueprint for the globalist enslavement of America remains unchanged and we Americans are marching directly toward our final demise as a nation. With all the things we write about, and with all of the things that we call attention to, the methodology associated with the subjugation of the people of the United States, can be accurately summarized into a four part plan with the final goal of the destruction of the United States.

1- An economic collapse is unleashed against the people of the United States.

2- The ensuing chaos will lead to the pretext for the imposition of martial law.

3- The martial law phase will result in the imposition of a New World Order which will wipe out all notions of private property and constitutional liberties.

4- World War III will commence and this will culminate in the destruction of America.

This article is introductory in nature, and it will serve to expose the globalist four part agenda to enslave America. Subsequent articles will be offered as part of a multi-part series which will explore each of these four areas in detail along with some potentially life-saving suggestions intended to enhance individual survivability during each of the four phases. Certainly, our $18 trillion dollar debt, plus our $240 trillion dollar unfunded liabilities (e.g. social security, Medicare) and the one (plus) quadrillion dollar credit swap derivatives debt are all poised to collapse the economy once and for all.

The entire GDP of the planet is under $70 trillion dollars. Therefore, the derivatives debt can never be paid off, not in this century and not even in the 50th century.

The collapse of the economy is a certainty. Certainly the globalists can merely wait for nature to take its course and the three aforementioned debts will naturally crush the economic life out of this country. However, our quasi-governmental agencies and governmental agencies have practiced for the day of collapse and seem to be accelerating the planned demise. Treasury Secretary Jack Lew and the UK’s Chancellor of the Exchequer, George Osborne, on November 10, 2014, ran a joint exercise simulating how they would prop up a large bank (e.g. Bank of America) with operations in both countries that has landed itself in trouble. Also taking part in the “bank failure drill” was Federal Reserve Chair Janet Yellen and Bank of England Governor Mark Carney, and the heads of a large number of other regulators, in a meeting hosted by the U.S. Federal Deposit Insurance Corporation.

I am convinced that the globalists will not wait for nature to take its course and our economy is going to die a “violent death”, as they will collapse the economy in a manner of their choosing the death of the American economic system will come like a thief in the night and the majority of sheep that inhabit this country, will never know what hit them. If you do not plan properly, every financial asset that you own will soon be gone.

Part two of this series will explore these specific events, and more importantly, some suggestions will be offered to help “soften the landing”.

We literally see the signs of martial law imposition in our daily lives. This is the key stage that will witness the elimination of all opposition to the subjugation of the United States.

This is the phase that the preppers spend most of their time telling their friends and neighbors to prepare for. There will be literally 30 days to six months of hell on earth for most major American cities. During this time, America will look like the movie The Purge.

During this period, most unprepared Americans will be victimized by criminal elements in their communities. There will be no 911 to call as you will be on your own. Also during this time, all opposition voices will quietly disappear. America will quickly come to know the meaning of the NDAA.

The implications and how to best prepare for this phase will be offered to the reader in Part three of this series.

Phase Three: Martial Law Leads to the Imposition of the New World Order and the Evisceration of All American Traditions

During this phase martial law will move away from the false pretense that existing social order is designed to keep all Americans safe from the designated boogey man of the of the day. You will own nothing but the shirt on your back. Your existence can only be described with terms like slavery and indentured servitude. America will have the technology to impose the most brutal dictatorship in all of human history as this country will make the Gestapo, the KGB and the Stasi look like child’s play.

In the New World Order, you will have but one purpose, to serve the whim of the state. Americans will live in fear of state sponsored snitches. Every day’s challenge will be dominated by a people who will be paralyzed with the fear of being branded a traitor to the state. Life in North Korea will be preferable to what Americans will be forced to endure. The state will be the sole enforcement agent for the real rulers of the planet, the corporations. This eventuality was predicted by the 1970’s movies Rollerball and Network. Part four of this series will explore these dynamics in detail. (It is during this phase than many of us will be declared “obsolete” as seen in this old Twilight Zone episode.)

Part four of this series will explore these topics in much more detail. Our military technology has been sold to our enemies. As a result, the Chinese are surpassing the United States in stealth technology. The Russians are showing advanced capabilities in electronic warfare as evidenced by the fact that their fleet just sent the U.S. carrier Roosevelt running for cover in the UK.

During this phase, we will see the rise of fifth column forces here at home designed to subjugate the home front. The implantation of these forces was accomplished under the cover of illegal immigration last summer. Part five will be devoted to an in-depth analysis of this topic.

People often ask me, “How long do we have”? The answer is that we are out of time and each of these four phases are underway to various degrees. Sadly, the American people have no advocates. Congress has been marginalized and the office of the President has been compromised for a very long time which leaves the people to organize a meaningful resistance on their own and this has a very remote possibility of success.