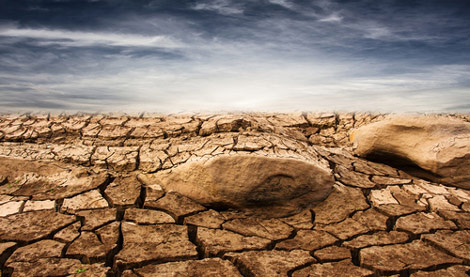 The announcement that California is rapidly running out of water has put new pressure on our most precious resource that could, in turn, force increased prices and shut down organic food production. Ultimately, it could even threaten the food supply.

The recent warnings from NASA hydrologist Jay Famiglietti, based on satellite data of the groundwater supply as it is threatened by the ongoing drought, is only compounding the issues for farmers who have already been driven to cut back production as water is rerouted to cities and industries. State leaders are embracing a full on crisis, and there is no sign of letting up:

At a news conference on March 19, 2015, California Senate President Pro Tem Kevin de Leon warned, “There is no greater crisis facing our state today than our lack of water.”

In fact, there is no contingency plan if California runs out of water. Unless the situation changes, an all out war for water is coming. The first front is economic.

Thousands of farming jobs have already been lost, and many more are likely coming in the state that produces more farm-to-table produce, and in particular more organic fruits and vegetables, than any other in the United States. Many farmers have been forced to stop planting their fields, while others have found it more profitable to sell their water rights to cities than to grow their crops at all.

Some pretty serious water wars have been waged in California for over a century, but the battle is no longer between just big cities like L.A. and the growers who provide the nation’s food. The new wars are being orchestrated and promulgated by the corporate masters of Wall Street and Big Agra.

Attorney Ellen Brown, author of Web of Debt and advocate of banking reform, put together a lengthy article full of some pretty disturbing facts that prove water will become a disruptive commodity bigger enough to strip wealth, assets and rights in California and beyond. It seems that everyone will be fighting for the last drop:

Wars over California’s limited water supply have been going on for at least a century… [especially] between farmers and Los Angeles urbanites over water rights.

Today the water wars continue on a larger scale with new players. It’s no longer just the farmers against the ranchers or the urbanites. It’s the people against the new “water barons” – Goldman Sachs, JPMorgan Chase, Monsanto, the Bush family, and their ilk – who are buying up water all over the world at an unprecedented pace.

Indeed, private companies have been buying up water rights, with major firms like Nestle bottling up California’s water and selling it as a premium on the consumer market. Industries and bankers controlling infrastructure are also striking momentous deals in the state and across the globe to redirect water to the highest bidder.

Left behind? The food producers we all depend upon. In particular, California produces more organic produce than anywhere else around. Brown reports:

Maps indicate that the areas of California hardest hit by the mega-drought are those that grow a large percentage of America’s food. California supplies 50% of the nation’s food and more organic food than any other state. Western Growers estimates that last year 500,000 acres of farmland were left unplanted, an amount that could increase by 40% this year. The trade group pegs farm job losses at 17,000 last year and more in 2015.

Farmers with contracts from the Central Valley Project, a large federal irrigation system, will receive no water for the second consecutive year, according to preliminary forecasts. Cities and industries will get 25 percent of their full contract allocation, to ensure sufficient water for human health and safety. Besides shortages, there is the problem of toxic waste dumped into water supplies by oil company fracking. Economists estimate the cost of the drought in 2014 at $2.2 billion.

What happens if they are driven out of business? Will organic foods still be readily available?

After that, will food be affordable at all?

With an eye trained on the depletion of resources and the swelling populations of megacities, former World Bank executive Ismail Serageldin famously warned the world:

“The wars of the 21st century will be fought over water.”

Those who have peered behind the curtain long enough realize that the major wars of the last few centuries have all been funded on both sides for the enrichment and concentration of power of a handful of Machiavellian elites.

Those who can think beyond these concocted wars to the unconventional wars of the modern era will also be wondering: who is orchestrating these conflicts over resources, and who benefits? Where do the profits go?

Numerous companies are poised to take advantage of the water crisis. Instead of protecting existing water supplies, implementing stricter regulations, and coming up with novel ways to capture rainwater, or desalinizing seawater, the corporate agenda is ready, like a snake coiled, to make trillions off your thirst.

With discussions of vast supplies of “primary water” stored deep in the earth’s mantle and scientifically proven schemes to desalinate ocean water or capture greater amounts of rainfall, Brown charges that major players are ignoring viable solutions to the Great California Thirst, and instead focusing on the concentrated profits made possible by resources scarcity.

The shortages thus far have already made the price of irrigation water jump more than 10-fold in cost, making it more profitable for some farmers with historic water rights to sell it to cities, in fear that it will be taken away if they don’t sell.

Meanwhile, Ellen Brown points out that California is not only set to restrict residential water usage, but is preparing to regulate ground water supplies in an unprecedented way that is causing outrage from farmers:

In September, a trio of bills were signed establishing a framework for statewide regulation of California’s underground water sources, marking the first time in the state’s history that groundwater will be managed on a large scale. Water has until now been considered a property right. The Los Angeles Times reported:

[M]any agriculture interests remain staunchly opposed to the bill. Paul Wenger, president of the California Farm Bureau Federation, said the bills “may come to be seen as ‘historic’ for all the wrong reasons” by drastically harming food production.

. . . “There’s really going to be a wrestling match over who’s going to get the water,” [Fresno Assemblyman] Patterson said, predicting the regulation plans will bring a rash of lawsuits.