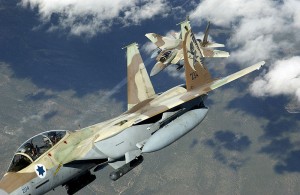 Uh oh – Iran just got caught with both hands in the cookie jar. It turns out that even while Iran has been negotiating a “historic peace deal” with the western world, it has been secretly operating a huge underground nuclear enrichment site that it didn’t tell anyone about. But this is what the Iranians always do. They lie, lie and then lie some more. So how in the world can you make a deal with a government that absolutely refuses to tell the truth? These revelations about a secret underground nuclear facility just outside Tehran come at a time when it looked like the Obama administration was about to cave in and give Iran just about everything that it wanted. The “deal” that Obama was going to give them would have allowed the Iranians to keep all of the nuclear infrastructure that they have already constructed and would also give them permission to start building nuclear weapons in about a decade. It would be a monstrously bad deal for the western world, and the Iranians should have jumped at it. But now these new revelations could throw a wrench into those negotiations. But much more importantly, knowledge of this secret nuclear facility has got to be extremely alarming to the Israelis. Prime Minister Benjamin Netanyahu has always said that Israel will never, ever allow Iran to construct a nuclear weapon. So what will happen if the Israelis determine that Iran is actually much closer to building a nuclear bomb that anyone originally suspected? The truth is that the odds of a war between Israel and Iran just went way up thanks to these revelations, and that is not good news for any of us.

Despite Iran’s denials that it is on the path to a nuclear bomb, new evidence charges that the Islamic republic has an “underground top-secret site” that is enriching uranium intended for nuclear weapons that has been hidden from the West for years.

According to the Iranian opposition group, the National Council of Resistance of Iran (NCRI), the complex, called Lavizan-3, is right outside Tehran, “buried deep underground in tunnels and underground facilities” with “radiation-proof doors” to prevent any leaks that could be detected by the United Nations International Energy Agency inspectors.

The revelations were unveiled during a Washington, D.C., news conference by the NCRI, which first exposed elements of Iran’s covert nuclear program in 2002.

The NCRI claims to have extensive knowledge of this complex, and it is even in possession of a photograph of a door that shields the facility from radiation which was smuggled out…

The NCRI describes the underground complex as having an elevator that “descends several stories, deep underground, and opens into a 650-foot tunnel, which leads to four parallel halls. Because the ground is inclined, the halls are deeper underground,” by as much as 164 feet below the surface.

The NCRI also said it smuggled out a photograph showing a 1-foot thick lead-lined door that shields the complex from radiation, and that the secret rooms and hallways are insulated for sound and radiation leaks so that they would remain undetected.

“If the United States is serious about preventing the Iranian regime from obtaining nuclear weapons, it must make the continuation of talks conditional on the IAEA immediately inspecting Lavizan-3 site,” said Soona Samsami, the NCRI’s United States representative.

So will Iran immediately allow international inspectors to go take a look at the Lavizan-3 site?

As they usually do, the Iranians will probably deny that anything is going on there.

But we have reason to trust the NCRI. They have a track record of being right on the money when it comes to the Iranian nuclear program…

NCRI has a track record of accurately disclosing secret Iranian uranium enrichment sites. In 2002, NCRI revealed Iran’s top secret uranium enrichment plant at Natanz, some 100 miles north of Isfahan, and a second top secret Iranian nuclear plant in Arak, approximately 150 miles south of Tehran, designed to produce heavy water for the production of plutonium for use in nuclear weapons.

Amazingly, there will be people that will read this article and leave comments defending Iran.

How in the world can you defend a regime that habitually lies and deceives the rest of the world?

If the Iranians had just been honest, they could have gotten an overwhelmingly lopsided deal from the Obama administration. And if they had actually stuck to the deal, the Israelis probably would not have attacked them for at least a few years.

But now all bets are off. At this point, Israeli Prime Minister Benjamin Netanyahu believes that the Obama administration has totally given up on the goal of preventing Iran from getting nuclear weapons. Just check out comments that he made during a speech earlier this week…

“I respect the White House and the President of the United States but on such a fateful matter, that can determine whether or not we survive, I must do everything to prevent such a great danger for Israel,” Netanyahu said in a speech.

He said world powers had pledged to prevent Iran from acquiring nuclear weapons, adding that “from the agreement coming together it appears they have given up on this commitment“.

So if the Israelis believe that the diplomatic approach is dead, what does that leave?

War is coming, and it might be sooner than most of us think.

It is not likely that Israel will attack Iran before the Israeli elections. But after the elections are over, anything can happen.

Riyadh’s only condition is that Israel make some kind of progress in peace talks with the Palestinians, Channel 2 reported Tuesday, citing an unnamed senior European source.

“The Saudi authorities are completely coordinated with Israel on all matters related to Iran,” the European official in Brussels said.

The Saudis hate Iran and do not want to see the Iranians get nuclear weapons either. So an attack by Israel on Iran would serve their interests.

And if the Saudis can use this crisis to push for a Palestinian state, that is all the better as far as they are concerned.

But of course if a Palestinian state is established in the aftermath of a war between Israel and Iran, that will just set the stage for even more war.

We are entering a time of great geopolitical instability. Wars and rumors of wars seem to be the order of the day.

And thanks to the duplicity of the Iranians, World War III could erupt in the Middle East at any time.

So would do you think of these developments? Please feel free to share what you think by posting a comment below…

The post The Odds Of A War Between Israel And Iran Just Went Way Up appeared first on The Economic Collapse.

Former Breitbart Reporter Receiving Death Threats Over Revealing Obama’s ‘Fake’ Past: “Ever seen a photo of a pregnant Michelle Obama?”