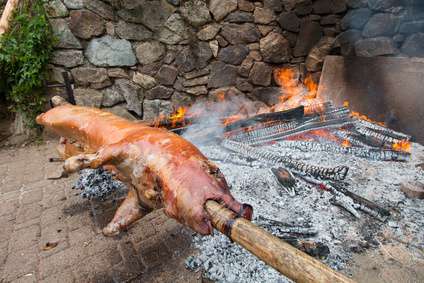 Surviving in a post apocalypse? Lost in the backwoods? Poor with an empty pantry? Survivalists, poor families, native tribes, and mountain men from past decades experienced the ease of bagging critters that you can sometimes catch right in your own backyard and have over a fire in no time. Here are 10 tasty critters in no particular order …

With a post apocalypse bearing down, what are you willing to eat if it came down to it?

Somewhere right now down in the American south — whether that’s Kentucky, Tennessee, Arkansas, Georgia, Florida, Alabama or Louisiana — a poor family is eating a creature caught in their own backyard or nearby Bayou, some kind of creature most people in the city would likely puke at the thought of eating. Stuffed possum. Baked raccoon. That kind of thing.

I don’t want to offend anyone with roots from somewhere in the south, actually if anything I want to tip my hat a bit to the brave souls over the years willing to bag some of these critters and then come up with easy ways of preparing them as a tasty meal for oneself or an entire family.Hungry yet? Here are 10 recipes we have searched out for 10 common creatures and now present to you as suggestions for emergency meals if your pantry ever runs empty or you have to make a run for it one day and find yourself alone or with your family and in the backcountry. All of these critters qualify as small game and can be shot, trapped, speared, or the smaller ones like squirrel and rabbit even taken with a child’s pellet gun or sling shot.

Remember, this is survival.

What do you season critters with?

If you’re empty handed in the backwoods, you’re not going to have anything to season or garnish these critters with or any flour if you favor deep frying. In that case, consider chopping up your critter into smaller pieces and roasting it over a good charcoal wood fire and this thing is now going to be a bit more palatable. Like wild fish and poultry, the flavor of smoke can help diminish the unique flavors of certain critters.With that said, the recipes that follow assume that you have a cache of packaged non-perishable food like emergency potatoes and vegetables, flour, cooking oils, and seasoning, essentials for today’s prepper concerned about a coming food shortage. These are all things you can use to season small game that you bag in the nearby woods or your own backyard.

Read more: The truth about eating insects: Can you eat bugs to survive?

When it comes to skinning and removing the entrails (as well as the scent glands in certain animals), a high quality bowie knife and sharpening stone can go a long way. With a Marine KA-BAR you can make yourself a spear and then after you’ve drained the life blood from an animal you’ve caught, now proceed to preparing a tasty meal with whatever you have available.In no particular order, here is the first critter recipe to consider:

In another zip-lock bag mix the flour, garlic powder, onion powder, 2 tsp. cayenne pepper, and season well with salt and pepper. Heat 2-3 cups of oil in a large skillet over medium heat.

Drain the rabbit from the buttermilk. Toss pieces into the flour mixture and shake until well coated. Add the rabbit to the skillet and fry for 10 minutes until golden brown on each side. Be careful to keep the oil hot enough to fry the rabbit, but not so hot it burns. When done, place on wire rack to drain excess oil. (Source: Kentucky Fried Rabbit)

Add squirrel and all ingredients except the tomatoes to the boiling water. Cover and simmer for 1 to 2 hours.

Add the tomatoes and continue to simmer for another hour. (Source)

How To Cook A Squirrel – Before you can cook a squirrel, you’re going to have to locate the scent glands which are at the small of the back, under the forelegs and the thighs. Once located, these scent glands must be removed carefully so that they are not cut. Squirrel meat is a medium red color.

Expect squirrel to be tender and mild in taste. Squirrel meat is low in fat and if you plan to substitute it in a recipe for chicken, you’ll need to add fat to the dish to make it comparable to chicken. Common preparations for squirrel are frying, broiling, or roasting, however older squirrels have tougher meat and will likely need parboiling beforehand to make the meat tender enough for easier chewing.

1 Large Raccoon
3tbsp Oil
4 Bay Leaves, crumbled
1 Large Vidalia Onion
1 Large Bell Pepper
2 Celery Stalks
1tsp Poultry Seasoning
2 cups Water
Salt and pepper to tastePreparation: Dress the raccoon and be sure to remove the raccoon’s lymph glands! Either have someone who is experienced remove the glands and the skin for you or seek out individual instruction for yourself from someone else experienced with raccoons. (This is a skill passed on through generations and not common knowledge.)

1. Wash thoroughly under cold running water.
2. Cut into quarters and soak in water for 3 to 4 hours.
3. Drain.
4. Season with salt and pepper and Poultry Seasoning.
5. Chop the onions, celery and bell peppers.

Cooking method:
1. Heat oil in fryer on medium high heat.
2. Add raccoon pieces and brown well on both sides.
3. Pre-heat your oven to 325 degrees F.
4. Place the browned pieces in the roasting pan.
5. Crumble the Bay Leaves over the meat.
6. Sprinkle a little more Poultry Seasoning over the meat.
Option: Poultry Season can be substituted for Old Bay Seasoning if you like Cajun flavor.
7. Add onions, celery and bell pepper.
8. Add water. Add more if needed during baking.
9. Bake for about 21/2 – 3 hours or until the meat is tender enough to fall off the bone.
10. If the meat finishes cooking and does not look brown enough, place under the broiler for a few minutes.

Turtle meat, cut into serving size pieces
2 cups flour
3 tsp black pepper
2 tsp garlic powder
1 tsp salt
Vegetable oilMix the flour, pepper, garlic powder and salt together. Heat oil in pan on medium-low. Shake a few pieces of turtle in the flour at a time and place in hot oil. Once all meat is in, cover. Brown on all sides then cook, turning occasionally, until done and somewhat crisp on the outside. Drain on paper towels and serve with your favorite sides. (Source)

How to Cook a Snapping Turtle – Unlike many turtles, snapping turtles are typically legal to catch and kill. It takes quick reflexes to dispatch one. Two main ways are used. The first being to hold a stick in front of the turtle, waiting for its head to emerge. Once it does, a swift swing with an axe to remove the head is required. Alternatively, a .22 shot to the top of the head will do the trick. Either way, the mouth of the turtle can still snap so caution should still be taken. It’s advised to keep the turtle turned downward to allow the blood to drain out.

Some choose to dip the turtle in to a vat of boiling water for a few seconds to make the meat easier to remove from the shell. This is also known to cause the skin easier to tear. Boiling isn’t required.

Place the turtle on its back and separate the lower shell from the upper, carefully trying to keep all the meat on the carcass. Once the lower shell is removed, take the time to scrape out all the remaining meat within the upper shell until the body is free. Some meat is found under rib-like bones that should be cut with bolt cutters. This meat is quite tasty and worth the extra work. (Source)

1 Woodchuck
2 Onions, sliced
½ cup celery
Flour
Vinegar and Water
Salt and Pepper
ClovesClean woodchuck; remove glands; cut into serving pieces. Soak overnight in a solution of equal parts of water and vinegar with addition of one sliced onion and a little salt. Drain, wash, and wipe. Parboil 20 minutes, drain, and cover with fresh boiling water. Add one sliced onion, celery, a few cloves, and salt and pepper to taste. Cook until tender; thicken gravy with flour.

Read more : Bugs You Can Eat in a Food Crisis

How to cook a Woodchuck – When preparing a Woodchuck/Groundhog to be cooked the blood should be drained, entrails removed and the remaining body cavity wiped clean. The meat should then be hung for 48 hours at which time it is ready to be skinned and cooked.

The meat of a Woodchuck is dark but most find it to mild and tender to the palate. It’s not required that the meat be soaked but still many people choose to soak overnight in salt water. It’s required for you to remove the animals scent glands, known as kernels. There are 7-9 of them found in the small of the back and under the forearms. Older animals may require parboiling to soften the meat. (Source)

Roll the gator in the flour and deep fry until golden brown. (Source)

Pig (wild hog, preferably 100-120 lbs).
2 Onions
Your taste of seasonings.
3 Potatoes
Hot Pepper if you like food with a kicks.
Bacon grease or 1/2 lbs bacon.Shape aluminum foil into a pan so that ham can be wrapped and sealed in it. Place ham in foil. Place bacon grease or strips on ham. Slice onions and place on top of ham. Slice potatoes the long way and place around ham and then sprinkle all with spices. Seal all ingredients in aluminum and do not open foil until done cooking. Cook on low heat 3-4 hours and then turn up to 450 degrees for an additional hour or two. (Source)

Chop apple into chunks.
Layer apples and cleaned boiled earthworms in an air-tight container.
Refrigerate for 24 hours.
Remove apples and roll in a mix of all purpose flour seasoned with paprika, salt & pepper.
Then roll worms in same flour mix.
Deep fry both in the same pan together.Earthworms can be a high source of protein containing several dozen grams of protein per worm (larger worms equal more protein). Preparing earthworms for a meal takes some prep first. There are few options including boiling a worm for 15 minutes at least twice, soaking for 3-24 hours in water, or milking the dirt from the worms body with your hands. Worms are not bad tasting once cleaned but they are bitter. Drying the worms mellows the bitterness and also prevents the worms from popping when you fry them due to their 90% water content. (Source 1), (Source 2) (Source 3)

Keep in mind, the people who eat these critters best are those who are prepared beforehand with canned or bottled veggies or even freeze dried food packets (look for potatoes and other vegetables as these go with just about any kind of meat) or are those blessed enough to have a garden or farm where they can harvest fresh vegetables, herbs, tomatoes, and potatoes, just to name a few.

The Lost Ways is a far-reaching book with chapters ranging from simple things like making tasty bark-bread—like people did when there was no food—to building a traditional backyard smokehouse… and many, many, many more!Learn more:

Survival Herbal Recipes From Our Ancestors

The EPA Takes an Ax to Self-Sufficiency: Most Woodburning Stoves Will Soon Be Illegal

Curing and preserving meat in the wild: 5 different techniques