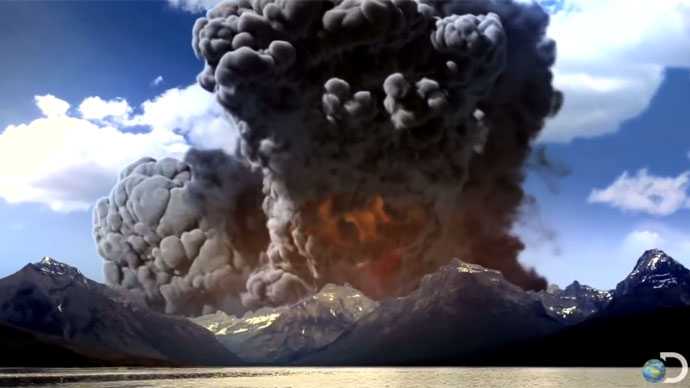 Since 1923 the land under the Yellowstone Supervolcano has been swelling — a sign confirming reports by scientists that we are 40,000 years overdue for an eruption —

— an eruption that could lead to the death of vast numbers of people in North America, causing an evacuation larger than any before scene in the history of the world.
Volcanic Caldera – A volcanic feature formed by the collapse of land following a volcanic eruption. Basically, this occurs when the magma that was supporting the land below is expelled during an eruption, thus leaving an empty chamber unable to support the weight of the volcanic edifice above (the mountain above).

The Yellowstone Caldera can be found in Yellowstone National Park. For the most part, the caldera is located in the northwestern portion of Wyoming, but it also extends into Eastern Idaho.All told, the Yellowstone Caldera measures 34 miles by 45 miles and was discovered during the 1960’s and 70’s by Bob Christiansen of the United States Geological Survey through the use of geological field work.

Of course, when it comes to SecretsofSurvival.com, just talking about the dimensions of the Yellowstone Caldera is hardly the purpose. Along with this, it’s the danger within the caldera that has us writing this article.

First thing’s first: Where there is a caldera, a volcano has erupted. In the case of the Yellowstone Caldera, we’re hardly out of the water (or molten mantle rock as is truly the case).As we speak, beneath the caldera light molten mantle rock continues to push toward the surface, which is the reason for Yellowstone’s numerous geothermal vents (Old Faithful, for example). That makes Yellowstone a rare hotspot of geothermal activity.

In a nutshell, remnants of the past tell us that we do not want this supervolcano to erupt again.

Many believe that some time in the past, multiple eruptions appear to have literally blanketed what are now the states of Washington, Oregon, Nevada, California, and Idaho with lava (these states are linked by flat calderas that connect like the beads to a necklace).

Interestingly, though, in the distant past it is believed that the volcano has undergone three terrible eruptions, with the last, forming the Lava Creek Tuff. In fact, during this explosion the majority of North America is believed to have been covered by volcanic ash (very dangerous as will be noted later). Not to mention, several smaller steam explosions have caused trouble (one which served to form a five kilometer crater at Mary Bay near Yellowstone Lake). Further lava flows with no eruption have caused craters in the past.

Said another way, there is a large chamber of magma that is housed beneath the caldera’s surface. The magma holds gasses at bay due to the pressure that the magma is under. However, if some type of geological shift were to occur, than some of the gasses might bubble out which would cause the magma to grow or expand. If things continue along this line (the magma continues to expand and release further pressure) the result is a large gas explosion.

Is There Reason to Worry Right Now About the Yellowstone Supervolcano?

In sum, yes and no.Here’s what we know. Back in 1995 satellite images began to show that the Yellowstone Caldera was rising. This was mostly likely due to a backup of molten rock miles below the surface.

The good news is that the majority of the caldera sank again in 1997. However, the north rim continued to rise until 2003, and with it several geysers awoke along with holes emitting gas and steam.

Once the rise stopped (in 2003) so did the majority of the strange activity.

Every so often at the Sour Creek Dome (a major feature in the eastern section of the caldera) magma reaches the mantle layer and spreads like water before returning below the surface through several natural tunnels. However, the natural valve at the north end of the tunnel – where the land continued to rise until 2003 – can only handle so much at once. Hence, this may be what caused the problem: Too much magma at one time there for an extended period.

But why then? What does it mean? No one really knows as we’ve only begun to truly study the area in the last decade or so.

What Would Happen if the Yellowstone Supervolcano Erupts?

If the volcano at Yellowstone were to erupt like it appears to have done some time in the ancient past, we’d love to paint a survival scenario for you. However, beyond getting ready for the cold that might come due to the ash blotting out the sun and life as we know it (and moving away from the center of the eruption as much as possible) a survival scenario really doesn’t exist in the traditional sense.First, anyone within about 100 kilometers of such an explosion would simply be killed by the explosion itself (remember that the eruption in the ancient past emitted 240 cubic miles of material) or the volcanic ash quite quickly.

Next, such an explosion would leave the majority of the North American continent below ash. The ash would be more significant closer to the explosion, but dangerous amounts would still reach three quarters of the continent.

After all, remember that volcanic ash is really very fine rock and mineral particles. Thus, these are dangerous to breath as they tend to cement together (and that’s not good in a human body). Further, they are abrasive to the eyes. Last, when ash falls on a structure it will cement and become quite heavy. In other words, a likely consequence of it are millions of destroyed shelters.

Oh yeah, and on top of it all, ash is dangerous to mechanical devices like cars.

As was indicated earlier, if you’re within 100 kilometers of the supervolcano, you’re in big trouble. However, there are some precautions one can take in the event of dealing with volcanic ash, and these really start with having the appropriate supplies on hand.

Beforehand a Supervolcano Erupts, You Should Have

Extra dust masks.Goggles (to protect your eyes from ash).

Non-perishable food to last several days or even weeks.

Wood for a fireplace or stove.

Extra-large (wide and long), heavy duty tarps for covering your home and vehicles from ash coming down.

Cash (forget credit cards and ATM’s in this situation)

Two-way radios with extra batteries (don’t depend on cell phone networks working for very long during a time of catastrophic disaster).

Plans and maps for evacuation to a distant region of the country or even to the Southern Hemisphere. An eruption of the Yellowstone Supervolcano is a major event and a vast amount of people in North America are likely to die. Surviving such an extreme event calls for extreme steps — such as journeying by foot, horse, or boat to lands in the Southern Hemisphere which scientists say will be least effected by an eruption of this magnitude.

Boat moored on the coast with extra fuel (not everyone owns a boat, but if you live near the East or West Coast a boat fully stocked with supplies can help you get several miles away and out of immediate danger).

Final Word on the Yellowstone Supervolcano

Further, it’s not a bad idea to know your child’s school emergency plan and to have some of the above in your car (though the reality is that if you don’t have to drive, then don’t when it comes to ash). Beyond that, you should stay indoors and listen for directions from emergency personnel as long as possible. If you do need to leave the house for any reason, wear a mask to protect your eyes.

And hope that the world doesn’t turn into a frozen tundra as many think parts of it will.

In the end, there is no definitive evidence that they Yellowstone supervolcano will erupt anytime soon. However, most scientists do believe that it eventually will happen. It is reported to erupt every 600,000 years approximately. The last time it erupted was 640,000 years ago, according to scientists.

We are overdue for the next eruption.

Yellowstone ALERT: 200 Earthquakes In 10 Days As Ring Of Fire Awakens