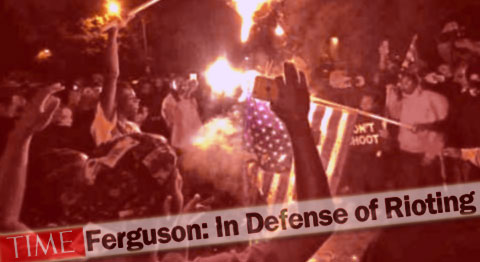 For one TIME magazine writer, the acts of violence in Ferguson are an entitlement for those suffering racism. “Peaceful protesting is a luxury only available to those safely in mainstream culture.”

What is clear is that the Ferguson riots, and those that have spread elsewhere, are not real in any organic sense. They have been planned, provoked and are now being used to divide and conquer an already fractured America.

The Washington Post hit the nail on the head about how the “inevitable” riots are more like a “staged performance”:

What occurred Monday night — and may continue in the days ahead — is rioting as planned event, so pervasively predicted, so extensively prepared for as to obscure the power and meaning of the protests.
[…]
A news media obsessed with predicting the next step, a security apparatus equipped to put down almost any uprising, and a political power structure apparently seeking to head off violence by predicting it have combined to produce an unprecedented sense of inevitability, reducing what has historically been an explosion of frustration to a kind of staged performance.

Incredibly, Obama himself commented that the Ferguson riots would make for good television spectacle:

“There is inevitably going to be some negative reaction, and it’ll make for good TV,” Obama said.

Ultimately, though he urged for ‘calm’ in the face of the Michael Brown decision, President Obama justified the “anger” now playing out as violent protests, arson and outright riots as an “understandable reaction”:

…the frustrations that we have seen, are not just about a particular incident. They have deep roots in many communities of color, who have a sense that our laws are not always being enforced uniformly or fairly… it’s not just made up. It’s rooted in reality.

But there were those in the mainstream media who did, in fact, make excuse for these criminal acts.

Arguing “In Defense of Rioting,” TIME Magazine’s Darlena Cunha provided some incredible justifications for the senseless violence and destruction that are as outrageous as the riots themselves:

When a police officer shoots a young, unarmed black man in the streets, then does not face indictment, anger in the community is inevitable. It’s what we do with that anger that counts. In such a case, is rioting so wrong?

Riots are a necessary part of the evolution of society. Unfortunately, we do not live in a universal utopia where people have the basic human rights they deserve simply for existing, and until we get there, the legitimate frustration, sorrow and pain of the marginalized voices will boil over, spilling out into our streets. The violent protests in Ferguson, Mo., are part of the American experience. Peaceful protesting is a luxury only available to those safely in mainstream culture.

For Cunha, lawless rioting is a specific privilege for those who’ve suffered racism:

Blacks in this country are more apt to riot because they are one of the populations here who still need to.

Those who dare to condemn the riots, according to the TIME writer, are “head shaking” and “finger pointing” under the guise of “privileged explanation” – that is, white privilege:

…blaming someone else for your failures in the United States may very well be an astute observation of reality, particularly as it comes to white privilege versus black privilege. And, yes, they are different, and they are tied to race, and that doesn’t make me a racist, it makes me a realist. If anything, I am racist because I am white. Until I have had to walk in a person of color’s skin, I will never understand, I will always take things for granted, and I will be inherently privileged. But by ignoring the very real issues this country still faces in terms of race to promote an as-of-yet imaginary colorblind society, we contribute to the problem at hand, which is centuries of abuses lobbied against other humans on no basis but that of their skin color.

But the riots, burning police cars and acts of violence are not addressing the real issues of police brutality and racial strife.

They are missing the point, and instead giving easy justification for more police power, more riot gear and more crowd control.

Rather than helping the causes of underprivileged, inner city blacks or driving some sort of ‘national conversation,’ these tactics are driving a media frenzy and a police state:

The result was a pivot from the questions of justice and race relations that drove August’s protests to a more tactical debate over how to contain popular rage.

Thanks to a relentlessly forward-skewed news media — “What will happen next?” was the topic of nearly every cable news discussion — Monday night’s violence became on-demand programming for a nation that flits from one blockbuster event to the next.
[…]
Instead of discussions about what might be done to diminish the likelihood of racial violence, the popular debate focused over the past week on how big the explosion of anger would be. In recent days, it was easy to find at least a dozen online polls asking something along the lines of, “Will there be race riots in Ferguson?” Like the opening act, which featured a burning police car and crowds in tear gas televised next to President Obama’s reaction to the grand jury decision, these race riots are staged events to titillate global audiences, while distracting from any number of issues, including last week’s executive amnesty granting millions of immigrants legal status and the stale and staggering economy that has killed the middle class and stifled any chance of meaningful employment for those struggling from the bottom up.