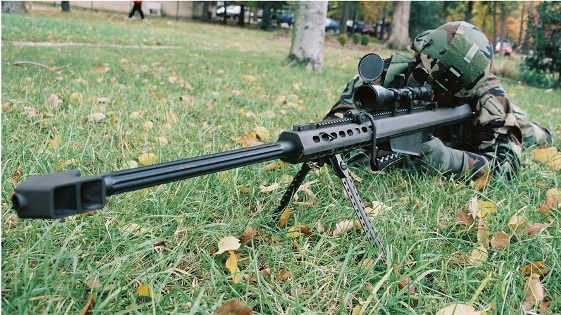 Okay, okay, I kicked this list off with the Barrett just because. I don’t own one and I wouldn’t buy one, but I’ll tell you what, if SHTF, and you have one, you’re on my side.

The sticker price ($3,000-$12,000) on one of these monsters is enough to take anyone’s breath away, but witnessing the colossal *POW* that this bad bitch delivers waaaay down range will also take your breath away. Nothing on the civilian market can deliver anything close to the *smack* of the Barrett. Consequently, there’s a growing movement in different states (mainly New York, Massachusetts, Hawaii and Illinois) to remove the .50 BMG rifle from the civilian market altogether. California banned it in 2004. So, if you have more money than you know what to do with, this could be a great investment. Buy a few and then sell them after they’re banned nationwide for 4 times what you paid for them. 😉

Advantages: it’ll make anyone go “. . . . . . wow;” it’ll penetrate light armor with NO problem; people will open the door for you when they see you carrying it; you can disable equipment and engine blocks from over a mile away; Made in the U.S.A.

For what you’d spend on one Barrett .50 BMG you could buy a truckload of these things. I’m not a big fan of them. A friend of mine has (maybe had) a Russian SKS and the thing would sometimes fire two rounds with one trigger pull. This may sound cool, but neither of us thought it was. They’re cheap for a reason.

Here it is. You need a sniper set up – period, and there’s a reason the .308 is the most widely used sniper round, it delivers – consistently. It may not have the more flat trajectory of a .270 or the extra wallop in a 30-06 (30-06 ammo), but it delivers, has moderate recoil, and offers a more common caliber with a wider selection of ammunition.

Of course, the flip side of having a sniper set up is that it’s only worthwhile if you actually spend A LOT of time (and money) learning how to use it effectively at long distances. Chances are, for anyone not in Navy Seal sniper school, they’re not going to. However, the rifle can still get plenty of use hunting large game. The 180 grain .308 cartridge is my top recommendation for large game. It hits hard.

What’s better than a bolt-action .308 WTSHTF? A semi-automatic .308. If you’re 3 weeks into TEOTWAWKI, holed up in your house with stacks of books around your picture window to serve as makeshift “sandbags,” you’ll want the M1A standing nearby. Gotta send a message to The Golden Horde hanging out by your mailbox? The M1A will do it.

Advantages: common caliber, stock one round for your bolt-action AND your semi-auto; Made in the U.S.A.

Disadvantages: $1,300 and up typically for a new one; heavy if carrying long distances

Ah yes, a handgun enters the scene. You have to have a handgun, and the 1911 .45 ACP (Automatic Colt Pistol) is a beauty. Let’s say it appears TEOTWAWKI is on the verge of happening and people are panicking. They’re out in force to empty the local grocery store’s shelves, and you’re heading into town as well to get whatever you can. This is the stage at which you’re not going to head out with rifles wrapped around your torso unless you’re begging for trouble – HOWEVER – you’re not going unarmed either. Shit could break out in the cooler isle as 28 different dads battle over the last gallon of milk and suddenly one them pulls a piece. You need to be ready without letting people know you’re ready. Additionally, you need a piece for your SHTF “go bag” and the .45 contains a whole lotta lead.

Disadvantages: limited magazine capacity (typically 8 + 1 in the pipe); $800 and up for a good one

The sound is undeniable. You hear that and you instantly know what it means, “You wanna roll with me?” The only reasonable response is, “errrr . . . . nah, I’ll move along.”

You can get a shotgun that’ll take a bigger shell, but you don’t need it. The 12 gauge is exceptionally common and it’ll take a variety of shells: birdshot for game hunting survival purposes; double-ought buck for pushing intruders not only down, but back out the window they came in through; and slugs for anything else.

Want to mount that shotgun to your bed frame (lol)? Check out one of my previous posts on “The Backup” here.

Disadvantages: none come to mind

It’s durable, designed to be thrown into a mud hole for a month when it can be dug out and immediately used without cleaning. That might be an exaggeration, but not by much. It also delivers a beefy round for a standard issue assault rifle. If you’re outside the United States, there’s likely readily available parts and ammunition.

Disadvantages: lacks the accuracy found in other assault rifles; made in China, or Russia, or Yugoslavia – you get the idea.

What’s a more common caliber than the .45 ACP? The 9mm. Unfortunately, it’s the most common handgun caliber in the United States used against police officers. Thugs love it. Love the 9mm, but don’t be a thug.

Advantages: cheaper to shoot than the .45 (and thus practice with); high capacity magazines; easier to conceal and carry

I can hear it now, “What!?” That’s right, the .22 rifle. It’s ALL about survivalism. Look, when TEOTWAWKI hits you’re going to want a rifle like the Ruger 10/22 for put some sort of meat on your dinner plate. Squirrels, gophers or the neighbors’ cats, the 10/22 is quiet, effective, and you can shoot all damn day for what it’d cost you to buy a 6-pack of PBR.

Additionally, a little recognized fact, Chechen rebels successfully used .22 rifles for sniping purposes against Russian troops in urban settings. The urban setting consisted of narrow streets and close buildings allowing these “snipers” to get exceptionally close to their targets. They strapped soda bottle silencers on them to further the effectiveness. I don’t care what you say about the .22lr, take one in the neck and you’ll think differently.

NUMBER ONE BEST Rifle for Survival 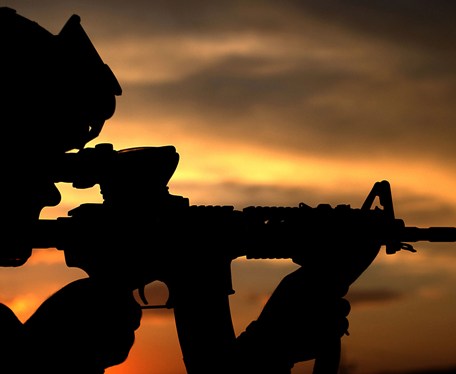 This should really come as no surprise. My only guess as to why so many survival writers don’t list the “Black Rifle” as their top choice is because they want to set themselves apart from the pack. Like in politics, when you’re the man on top, you can expect attacks. There are very solid reasons for the AR-15′s extreme popularity and cult-like following. There are very solid reasons why its the #1 choice of the U.S. military and para-military groups (“AR-15″ to include all variations). It’s the best – period.

Explaining in great detail why I believe the AR-15 is the single best choice for survivalists goes beyond the scope of this post. I will detail it in the future, however. In the meantime, basically:

Disadvantages: smaller caliber than what’s found in other battle rifles; many moving parts; rather annoying to clean compared to other rifles; the gas system often comes under criticism for throwing the “gunk” back into the chamber (some call this “shitting where it eats”), though this problem has been remedied in some newer models (at a higher cost).

This post supported in part by VA loans. Military veterans can save money for survival gear with a VA loan.

EMP Survival: Is Your Home Ready For The Blackout?