If you own a firearm and spend any amount of time on the internet each day, you have likely seen the headlines declaring “Obama to ban bullets by executive action” or some derivative of that type of news. For those who don’t know, I will give you the much abbreviated version. The ATF wants to change the classification of a certain type of round (M855) to “armor-piercing” and effectively make this round illegal for “production, sale and use”. I won’t get into the specifics of the language or why the M855 ammo is not significantly more armor piercing than just about any other round for the AR, or even how great the M855 round is. If you are curious, ITS Tactical has a nice write-up about that side of the argument. The fact remains that the government has placed that M855 ammo in its sights and wants to keep that out of your hands. What does this mean to preppers?

For starters it means that you will most likely have to pay more for ammo for some period of time. Why? Because any time there is any news like this ammo prices go through the roof. People believe that the government is going to ban everything, that they are coming for your guns and you won’t be able to buy any ammo before long. Is that true? I don’t know but it is like anything else in the world, when there is a greater demand, the prices go up and unless the supply ramps up to meet increased demand, there are shortages.

There are also people out there who snapped up as much ammo as they could when the news of this first came out and they aim to make a profit on the panic. The media isn’t helping this by all but encouraging runs on ammo suppliers. I can’t tell you how many articles I read over the last few years when we had the last panic and the supplies of ammunition disappeared about how it was the gun owner’s fault; that we were causing the scarcity of supply and not the government who was buying billions of rounds. I don’t have any problem with some entrepreneur taking an opportunity to make an extra buck and if I have to pay more, it is my fault for not buying when I could have at a lower cost.

bulkammo.com and ammotogo.com, their supply of .223 seems to be lacking along with the noticeable increase in the price of the M855 rounds. That doesn’t mean they aren’t experiencing brief fluctuations in supply.

What can you do?

First of all, don’t panic. I imagine that there are those of you who already have a supply of ammunition stored up. If you have been watching for years how this is playing out in the media, you might have thought long before now that it would make sense to build up your supplies. There are others out there, maybe who just purchased their first AR-15 and were stocking up.

You have a choice right now to either buy ammo at a higher price or wait; it’s that simple. Does that suck? Sure, but it isn’t anyone’s fault besides yours that you don’t have ammo already. Complaining about people who buy a ton and sell it at a profit is a waste of your time. There are no guarantees in life and cheap, freely available ammo was never promised anyone. Yes, I know that forces are behind the scenes manipulating the supplies, but you have to get over that.

Secondly, don’t give up on buying ammo. When the last ammo shortage hit, there was definitely a shortage of supply and prices were higher, but I was still able to find ammo and some wasn’t that much more expensive. While I had to shop around more, I was able to build my supply, albeit at higher prices. That is the nature of the game. I could have simply just refused to pay higher prices and complained about everyone else buying hundreds of rounds of .22. I had not reached my minimum amount of ammo for each caliber yet, so I wanted to continue to build my supplies. Naturally, this took me longer because of the shortage and having to look harder, but I was still able to increase my supply. 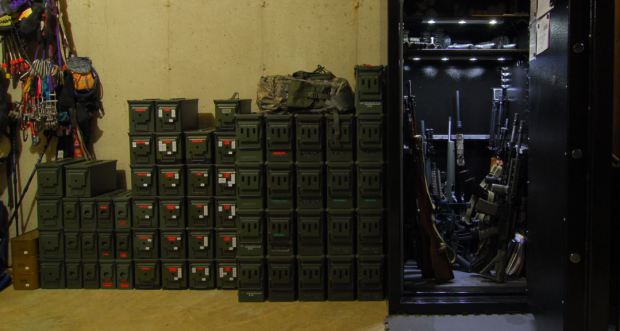 Don’t stop looking if Walmart is empty. Almost every time I looked for ammo at Walmart, they had empty cases and this lasted for several months. I heard of people figuring out the truck delivery schedule and camping out in the parking lot, but that seems crazy to me. I had the best luck at gun shows. The prices were comparable with the online retailers but you didn’t have to pay shipping. Regardless of the price increase, they still had the supply. Someone will want to sell you ammo and you can find it if you look.

Another thing I tried to do was to not use my supply when I went to the range. On range day, I would go to the store (after things had settled down a little and ammo was available) and purchase the rounds I was going to shoot that day. If they didn’t have a certain caliber, I wasn’t shooting that gun. That way, I never depleted my supply.

Finally, if this issue has got you fired up, let your representatives know. You can either contact your congress critter directly or support agencies that are fighting issues like this. The one I chose to support is the NRA who for better or worse is the most prominent voice in the fight for any 2nd Amendment issues like this. Your membership helps fund their efforts to prevent any erosion of our rights.

Examples like this are just one of the reasons we stock up on items so that we have an ample supply in case there are disruptions. Just imagine if there was a shortage of milk or eggs. What would you do? Does this proposed ammo ban mean they are coming for our guns? Who knows? I am only concerned about my supply and right now that is pretty decent, but I have spent years getting to where I am. Bumps in the road like this will happen with everything and I think the best idea is to not get upset, keep your head down and keep prepping.

Guns And Ammo Production Maxed Out: “This is a Society Preparing For War”

Can You Guess Which Firearm Calibers Are the Most Popular?