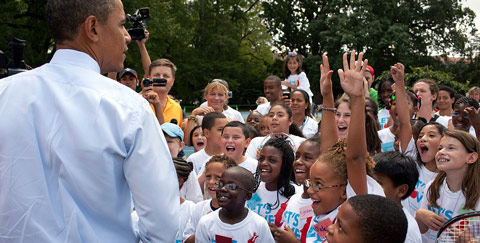 Free and affordable health care just gets better and better.

In 2015 the government will be activating some new “incentives” embedded in the Affordable Care Act in an effort to get more people to sign up.

But, as is often the case when the government says one thing, they mean exactly the opposite. In this case, when they say incentive what they really mean is that you are going to be penalized if you fail to acquire government mandated health insurance. But not just you. Your children, who apparently no longer belong to you anyway based on a recent court ruling, will be fined for your failure to get them on the insurance rolls:

Penalties for failing to secure a health-insurance plan will rise steeply next year, which could take a big bite out of some families’ pocketbooks.

“The penalty is meant to incentivize people to get coverage,” said senior analyst Laura Adams of InsuranceQuotes.com. “This year, I think a lot of people are going to be in for a shock.”

In 2014, Obamacare’s first year, individuals are facing a penalty of $95 per person, or 1 percent of their income, depending on which is higher. If an American failed to get coverage this year, that penalty will be taken out of their tax refund in early 2015, Adams noted.

While that might be painful to some uninsured Americans who are counting on their tax refunds in early 2015, the penalty for going uninsured next year is even harsher. The financial penalty for skipping out on health coverage will more than triple to $325 per person in 2015, or 2 percent of income, depending on whichever is higher.

So, that’s your incentive. Either sign up for Obamacare at a rate of roughly $750 a month or more for a middle-class family of four, or pay a $325 penalty or two percent of your income, whichever is higher. Plus, if you have kids, they’ve been incentivized too!

Moreover, if you fail to sign up for Obamacare and subsequently refuse to pay your penalty your house will be raided by armed IRS agents, seized by the government, and you’ll be imprisoned for tax evation.

Welcome to the new America, where the government now has the power to compel you to purchase products from private companies under the threat of imprisonment or death. Yes, death. Because if you run from those armed IRS agents they’re going to use their brand new militarized AR-15′s to ensure your compliance.

At this point the only chance Americans have for the complete destruction of the Affordable Care Act is for a Supreme Court ruling expected in the Spring of 2015. If the court rules against Obamacare over its illegal federal subsidies then the law could fall apart almost instantly.

These days, even democrats who supported the legislation before anyone had a chance to actually review it are up in arms. It seems many have finally realized that free health care isn’t actually, well, free.

Cindy Vinson and Tom Waschura are big believers in the Affordable Care Act. They vote independent and are proud to say they helped elect and re-elect President Barack Obama.

Yet, like many other Bay Area residents who pay for their own medical insurance, they were floored last week when they opened their bills: Their policies were being replaced with pricier plans that conform to all the requirements of the new health care law.

“Of course, I want people to have health care,” Vinson said. “I just didn’t realize I would be the one who was going to pay for it personally.”

Suckers, the whole lot of them. Unfortunately, they supported legislative action that will eventually unravel the entire economic fabric of the United States of America unless it is repealed or overturned by the U.S. Supreme Court.