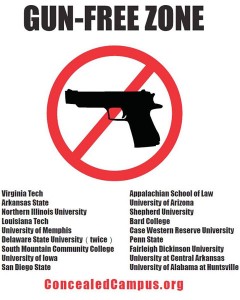 Introducing: the first school installation of a Shooting Detection System, brought to you by DARPA (the Defense Advanced Research Projects Agency) and its affiliated contractors.

This $100,000 detection system alerts authorities automatically to gunfire with the aim of cutting response time, but it can’t stop bullets or save lives – at least not in any direct sense:

Authorities fired tester blanks Tuesday in the Methuen, Mass. school, which authorities did not name for security reasons, to demonstrate the Guardian Active Shooter Detection System, which alerts police of gunfire within one second, according to Reuters. Police officers and Democratic congresswoman Niki Tsongas attended the demonstration, but students were not present, as schools were closed for Veteran’s Day.

Shooter Detection Systems’ CEO Christian Connors said the system was the first of its kind in the country, and that the company was talking to the federal government about its wider use. The system costs $50,000 to $100,000 for a school of Methuen’s size, Connors said.

The system consists of an outdoor acoustic system and 50 to 60 smoke-detector-size sensors installed in hallways and classrooms, he said. It also uses infrared cameras to detect muzzle flashes, he said.

First in the nation, the Methuen, Massachusetts school that tested the DARPA detection system is essentially demonstrating it for other schools across the country to buy it, too. But the biggest factor is not a rise in school shootings, but the fear surrounding the high profile cases.

There were about 45 school-associated violent deaths (not just by guns) at elementary and secondary schools each year between the 1992 and 2010 school years, according to the report. In other words, Fox said, the number of gun deaths documented by Everytown over the past year and a half are not out of the ordinary. [Emphasis added. Source.]

Fear (not truth) is a big, big seller.

And fear’s best answer now goes for $100k. The media has sold the idea that schools are more dangerous and shootings more common, but it just isn’t true. Techdirt makes the case clear:

Congratulations, America. A defense contractor tried to sell you on the idea that our schools are war zones and you bit like a musky on a minnow. The manufacturer’s website, along with most of the accompanying news articles, are filled with statistics all about how school and mass shootings are on the rise.

Obviously this serves as evidence that such shooter detection systems are needed. That way, the $100k per school systems can alert authorities when these increasingly common shootings occur. The most common figure you’ll hear from these contractors and in the news is the same one authorities used in buying this detection system: there have been 88 school shootings in America since the Sandy Hook tragedy in 2012.

The claim comes from Everytown.org, an organization dedicated to gun control and safety. And if that statistic sounds shocking to you, there’s a very good reason for that: it’s complete bullshit.

Ultimately, the system does have the power to, well, alert authorities, but so does the ordinary telephone, the cell phone, text device and etc.

While it’s definitely true that every second counts for anyone under attack, reporting time from bystanders in school shootings has not been the major debilitating factor; by the numbers, police and SWAT response time has been. The simple truth is that the authorities CAN’T be relied upon to save you.

Delayed response time accounts for a big part of the problem, even with the best intentions. Here are just two examples of why response, not reporting, has caused more loss of life:

• In the 1999 Columbine Massacre shooting, SWAT teams arrived on scene a reported 1 hour and 15 minutes after the first report, with the mass media arriving before SWAT did. It took another 4 hours before police officially found the two dead suspects, who reportedly took their own lives.

• In the 2007 Virginia Tech shooting, both the university and police authorities were heavily criticized, even through official channels. Lawsuits were filed over the delayed response in both informing students/faculty of the emergency situation and in stopping the shooter. The morning began with the murder of two people in a dormitory at 7:15 am, police response by 7:24 am; university officials weren’t alerted until 7:57 am, and no action was taken by university officials until the conclusion of an 8:25 am meeting discussing how to alert students. Ultimately, an email – criticized as “vague” – was sent to students and faculty at 9:26 am, about 15 minutes before the killer began his mass murder spree in a university hall. Police reportedly responded to this second shooting within 3 minutes, but took another 5 to enter the building, which was obstructed by a chained door, allowing the killer to take more victims.

Also at issue is the fact that the widely-used statistics on school shootings – which claim that 74 school shootings have occurred since Sandy Hook in December 2012 – are bogus and deceptive.

Issued by Everytown for Gun Safety, the gun control group founded by billionaire former New York Mayor Michael Bloomberg, the statistic starts with the 10 or so school shootings (the intentional mass murder Columbine/Sandy Hook kind) that have occurred in the timeframe which fit the popular notion, where a shooter enters a school and takes out targets.

Then, that statistic deceptively piles on other crimes and incidents which fit – at best – only by technicality:

• 39 incidents of common crime, including robberies, that occurred on/near schools (one example was an early-morning robbery that occurred on a street that cuts through a university’s property)
• 16 cases that happened outside of school hours with individuals completely unaffiliated with the schools (i.e. not teachers, students, facility, parents or employees)
• 6 suicides (one, for example, took place after hours in a vehicle in a school parking lot)
• 3 accidental discharges

While all of these are tragedies, and all of these crimes are undesirable in society, it is intellectually dishonest to classify them as school shootings, yet that is deliberately what has been done by the gun control crowd to stoke fear and anger over the issue of firearms. Techdirt argues:

Look, that’s 10 too many, of course, and every instance of gun-related death at a school is a tragedy in its own right, but that stupid, wrong, idiotic 74 shootings statistic (before it was 88 school shootings) was pitched to concerned parents, school officials, and politicians by both a company that has insane amounts of money to gain and a complicit, sensationalistic and lazy mass media and nobody is bothering to tell people that these are lies. If the company is pitching an increase in school shootings as a primary reason for spending six figures per school on their product, what happens when I show you that school shootings are not on the rise?

At the end of the day, many people are well aware of the absurdity in schools. Gun free zones have disarmed the very figures within schools (be it a principal, teach, coach, school officer or even janitor) who could be responsibly packing heat and in position to respond on scene to these worst case scenarios.

But given the insanity of gun free zones, there are a few things to know and be prepared for should a shooting or other disaster strike:

• Self defense training: is essential for anyone interested in their own safety and freedom. Weapons handling and concealed carry is only one component of it. Martial arts training would be a potentially game changing factor, but situational training experience in dealing with a survival crisis of any kind would also be helpful.

• Situational awareness & mental preparedness: As Daisy Luther pointed out, in a crisis situation, denial can be deadly.” The psychological reaction to a potentially deadly situation cycles through phases of denial, delay, diagnosis, acceptance, consideration and (finally) action.

Your job is cut to the chase as quickly as possible, size up the situation and hopefully apply previous training when taking swift action. Creative and spontaneous answers are perfectly fine; the elements surprise and distraction can aid basic fight or flight response.

• Alternative Self Defense Tools: If guns are forbidden by law, it may not be wise or practical to break that law. But you may still be able to carry (depending on the location and its applicable regulations) other forms of self defense, including several identified by TheArmsGuide.com:

Most of these require some serious training to be effective, and many of these may still fall short of the threat of a trained gunman. However, if flight is not an option, you may have little alternative but to try. Use your best judgement in any situation.

“Greece Just Blew Up the Death Star of Debt”: A Way Out of Euro Bondage