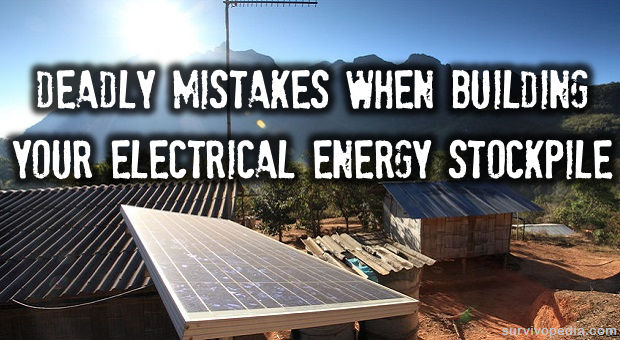 Given the title, you might envision being electrocuted when talking about common mistakes when building your energy stockpile.

But for the prepared, other types of mistakes can be every bit as dangerous and nearly all of them occur in the planning phases as opposed to installation, use or maintenance.

The human brain rewards us for certain behaviors by producing dopamine. When we perform tasks that contribute to our survival, such as setting and achieving goals, dopamine is produced. It binds to receptors and we feel warm and fuzzy about what we are doing or what we have done.

In this case, the objective is building an energy stockpile. What is interesting to me is that we receive more reward during the pursuit of a given ambition than when we actually realize it.

In fact, dopamine production peaks just before we actually achieve the end result. So if you have ever wondered if the chase is more rewarding than the catch, now you know.

Where this is problematic for those of us who prepare for hard times is that it can result in spending too much time in the planning phase, leaving us with less resources for the realization of the aim. I see this as similar to a student who keeps pursuing post-graduate studies as opposed to actually working in the field they have studied.

Whatever the reason for hesitation or delay, survival is the most do-it-yourself of all ambitions. It is the domain of the 20% who carry the other 80% in Western culture. Setting goals too high is chief amongst the reasons to delay doing the actual work of preparedness, like building your energy stockpile. People do not want to do anything until they can do it right.

This rationalization is used in all areas of preparedness. “I’ll buy it after the next paycheck.” Or “… when the new model comes out.” Then all of the sudden the time is up. One day the emergency is no longer a future concern, but is all around you. You are suddenly in it and whatever you have at that moment is all you have to work with.

At that point, you will not care are about bells and whistles. You will care about having light to suture a cut, the means to power a radio or to reference information stored in an electronic library smaller than a postage stamp because you could not possibly carry thousands of paper books.

All of Your Eggs in One Basket

If a modern army rolls through hunting people of your political, ethnic, racial or religious persuasion, it may be necessary to relocate if you are to live to ensure your family survives and to fight another day. If any of a dozen natural disasters wiped your home off the face of the earth you may loses everything you have in your home.

You have probably heard the dictum regarding redundancy that three is two, two is one and one is none. If you have two or three solar phone chargers and they are stored in the same location, you may just lose them both or all in the same calamity. Just like the rest of your mission-critical gear, you should cache some off-site. That way you will still have some capability to generate power.

The threat of nuclear high altitude EMP stands out among the dangers to any investment you have made an energy stockpile. Redundant caches of critical supplies should be disconnected from the grid to protect them from geomagnetic EMP and stored in Faraday cages to protect them against nuclear high altitude EMP. As mentioned in a previous article of mine, How to Protect Your Solar Gear from EMP, even entire buildings and roof-mounted solar panel installations can be shielded against EMP.

Small caches can be protected in trash can Faraday cages. Even gear in a bugout bag or go bag can be shielded in lightweight Faraday bags which will also protect your valuable equipment from dust and moisture. Both bags and cages can also be used as redundant layer to increase the effectiveness of electromagnetic shielding.

Failure Occurs in the Planning Phase

People addicted to convenience love to peddle quick fixes based in the personality ethic. They believe that motivation is as simple as changing your attitude or trying harder. “Just do it!” they say.

Not for one moment do I believe that is where most people fail. Most people fail to execute their plans because they did not invest sufficiently in committing themselves to the cause. If you really, truly understand how important it is to do something, you will not lack motivation. Is “mind over mattress” an issue when the house is one fire? No, it is not. It is only an issue when doubt or forgetfulness has crept in.

The secret to succeeding in an endeavor that is a process as opposed to an event, like developing alternative energy solutions, is have a clear vision of the end result that you desire and a sound understanding of why it is so important and a deeply rooted commitment to making it a reality. Then the obstacles along the way are not so insurmountable.

When a builder builds a house, before he even buys the material, he know how much lumber and how many nail he will need. Plan your energy stockpile out so you do waste precious resources on products you just end up buying again one day.

Cache Valley Prepper is a full-time survival and self-defense consultant, instructor and writer, but primarily identifies himself as a lifelong student of survival. He is profoundly grateful to his mentors for afflicting him with an insatiable curiosity about all things self-reliant but claims to be allergic to conspiracy theory. He is a talented competitive shooter, has a profound love of nature, and likes to backpack, camp, hunt and pursue outdoor hobbies. He studies and trains constantly and loves that his work enables him to get in plenty of “dirt time” all over the world … even if it means he has to work a little while he plays. Cache is a volunteer emergency responder in a small town without any paid services and holds numerous instructor and student certifications in everything from emergency management to less-lethal munitions and high explosive breaching. Cache Valley Prepper is a pen name used to protect his identity. You can send Cache Valley Prepper a message at editor [at] survivopedia.com

EMP: Could it Start the Next War?

One thought on “Deadly Mistakes When Building Your Electrical Energy Stockpile”