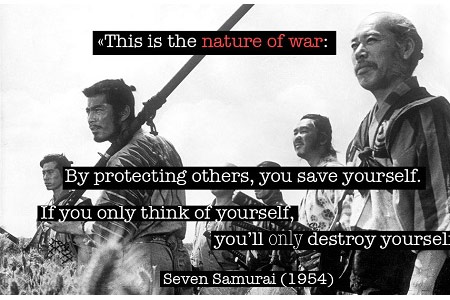 This article was originally published by Brandon Smith at Alt Market.

Popular media today, including television and cinema, are rife with examples of what is often referred to as moral relativism — the use of false and fictional moral dilemmas designed to promote the rationalization of an “ends justify the means” narrative. We are also bombarded lately with entertainment depicting an endless array of “anti-heroes,” protagonists who have little to no moral code fighting antagonists who are even more evil, thus vindicating the otherwise disgusting actions of the heroes. From “24” to “Breaking Bad” to “The Walking Dead,” American minds are being saturated with propaganda selling the idea that crisis situations require a survivor to abandon conscience. In other words, in order to defeat monsters, you must become a monster.

This theme is not only unavoidable in film and TV, but also in military journals, politics, and even within liberty movement discussion.

What I see developing is an extremely dangerous philosophy that rests on the foundation that victory (or survival) is the paramount virtue and that it should be attained at any cost. Moral compass becomes a “luxury” that “true” apex survivors cannot afford, an obstacle that could eventually get one killed. I have heard some survivalists and liberty proponents in anger over the trespasses of the corrupt establishment suggest a strict adherence to the eye-for-an-eye ideology, up to and including torture, harming of the enemy’s families, and even harming the children of those who would harm us.

There is also a small but ingrained subculture within spheres of survivalism that embraces the strategy of the “prepper pirate,” essentially planning their subsistence around the idea of taking what they need from others as a form of evolutionary realism. They believe that the “survival of the fittest” is more important than the survival of the principled.

In mainstream yuppie culture, this attitude would be labeled insane. Yet urban and suburban television addicts often cheer the concept of the ends justifying the means in their favorite prime time shows and consistently argue for morality stretching policies within government (as long as their “team” is in control of the football in Washington, D.C.). I have little doubt they would adopt such thinking in the event that disaster does strike and they find themselves unprepared amid desperate conditions.

In “Understanding The Fear Of Self-Defense And Revolution,” I discussed the inevitability of self-defense against criminal oligarchy and why common methods of pacifist activism are dangerously inadequate in the face of psychopathic tyranny. When self-defense or revolution is initiated, though, the movement does not necessarily fight only for its own benefit; nor does it fight simply to eliminate the threat. Our survival as individuals is not the primary concern; the survival of the principles and truths that drive us to fight is the ultimate goal. If there is such a thing as the “greater good,” truth and honor must be the apex of that vision.

If we cast aside our principles in the name of victory, then, ironically, we have still lost everything. Our war is fought on multiple levels, from the physical to the spiritual. Lose the spiritual war, lose sight of one’s conscience, and the physical war becomes meaningless.

I believe the formation of a liberty movement code, a kind of warrior’s code, is absolutely vital to our future. Without a new kind of oath, an oath not only to the Constitution but to our own internal values, the temptation to use our darker natures against the enemy during greater trials of the soul may be too much to bear. While conscience is an inborn gift, it sometimes requires a more outward affirmation in order to remain strong. Here are some elements I believe should make up the foundation of our code.

Defense Of The Innocent

We will do everything within our power whenever possible to ensure the safety and liberty of those people around us caught in the currents of collapse. Some might claim that the unprepared are not “innocent” because their lack of vigilance contributes to the decay of our society. I would say that while the ignorant are a danger to us and themselves, we would also be contributing to the decay of our society by refusing to help others when we have the ability to do so. Someone somewhere has to end the cycle. And if that requires us to sacrifice some of our energy and the satisfaction of saying “we told you so,” then this is what we must do.

I would also point out that the defense of the innocent does not begin when our economic and social structures end. We help them now, by offering them the knowledge to prepare and organize for mutual aid. We go to our town centers, to local churches, to our lecture halls; and we openly educate those who are willing to listen — not to preach politics or to indoctrinate, but to offer practical knowledge. We give them useful tools through neighborhood watch programs and Community Preparedness Teams. We teach them today how to defend themselves, their families and their property and how to invest in survival, so that tomorrow they will not feel compelled to become part of the problem, but part of the solution.

If we let our distaste for the unaware lead us into an attitude of “us versus them” against our own neighbors, then we will miss every chance to strengthen our communities. Our purpose is to bring others up, not to stand in pious judgment as they fall down.

We Prepare To Offer Aid, Even To Those We Think Might Not Deserve It

Many survivalists and preppers may scoff at this idea, but they would not be looking at the bigger picture. Offering aid to your community serves not only to help them, but to help you in the long run. Look at it this way; when FEMA arrives in a disaster-struck city or county, its “authority” means little to the shell-shocked citizenry. What does matter to them is that FEMA brings food, water and sometimes shelter. FEMA does this in its own sweet time and often allows numerous people to die before the aid is given, but it still maintains its authority over a region simply because there is no other alternative.

You must offer that alternative.

Imagine what would have happened if during the nightmare of Hurricane Katrina, while FEMA was lounging around watching the carnage and even denying access to private institutions offering supplies, New Orleans residents were greeted with liberty movement teams defying government mandate? What if liberty advocates from across Louisiana and the nation had marched right over the top of FEMA, escorted those trapped in the Superdome to a safe place, and gave them food and water? The movement raised millions of dollars for Ron Paul’s campaign (twice!), why couldn’t we do the same to save lives?

Even at a local level, this methodology could mean the difference between freedom and tyranny. Stockpiles of grain bought directly from independent farms can be had for very little money and strategically placed for use in future calamities. Affordable water filtration could prevent disease and dehydration for thousands. A team of engineers could solve waste and grid-down dilemmas. A team of well-trained security personnel could prevent looting, rape and murder. Imagine if the catastrophe the elites wish to engineer was mitigated or thwarted by the very people the disaster was meant to target? Imagine how much satisfaction that would give you.

Our Actions Are Inspired By Conscience, Not Rage

To fight in self-defense is entirely moral, but there are lines that, if crossed, destroy our moral high ground. Without the moral high ground, we become no better than the elites we seek to remove from our lives. This means that we do not harm people unless they are attempting to harm us. We punish criminals, not their families and not their children. We do not torture, not only because it is a useless tactic with little concrete proof of effectiveness, but because it is a morally reprehensible psychopathic act designed to fulfill a sick desire for sadistic power. It is not who we are.

When we fight, we fight in the knowledge that we have first and foremost protected our moral foundation. We see those who promote moral ambiguity and moral relativism as an element destructive to the purpose of liberty. Winning means nothing and survival means nothing, unless we endeavor to deserve life.

We Do Not Run Unless We Plan To Return

In an asymmetric revolution, there is rarely such a thing as a “front line” or a piece of ground that must be defended at all costs. That said, successful asymmetric warfare requires that the enemy pay an overwhelming price for every attack he initiates. This means that said revolt must always be aggressive, never relenting, always striking, and resting or retreating only to stage a more effective counter. Every time a totalitarian system advances without consequence, it generates political, social, psychological and tactical momentum. Without the courage to engage such advances, revolt is impossible. Fear leads to moral rationalizations. The fearful cannot adequately defend themselves, let alone defend others; and, once again, the moral high ground is lost.

Zero Tolerance For Piracy And Criminality Within

Prepper pirates and others on the very fringes of the survival movement who seek to thrive at the expense of others are not only criminal according to natural law, but they are also a blight on the reputation of the liberty movement itself. Our principles will require us to stamp out such people as a priority. Those who would viciously impose upon the innocent as a preplanned strategy are not redeemable. Even if they claim to hate the same elites we fight against, the enemy of our enemy is not necessarily our friend. Prepper pirates are rabid dogs who should be put down.

We Are Professionals, And Guardians Never Satisfied With Half Measures

We carry ourselves as quiet professionals. We strive to represent the best potential of what the liberty movement has to offer. There is no problem we cannot solve and no opponent too large. We do not know the meaning of the word “impossible.” We operate best under pressure and during disaster. We move to disrupt crisis before it begins when possible, and we refuse to stand back as spectators when crisis does develop. We work diligently to master all knowledge and training that could be used to achieve our goal, which is a free, prosperous and independent citizenry. We do not seek leadership over others; we only wish to teach others how to lead themselves. We will not stop until this goal is accomplished or until we are no longer breathing. We are not mutable or flexible where tyranny is concerned. We are entirely uncompromising. We are stubborn bastards, here to drive oligarchs even crazier than they already are. We are here to undo them and their treacherous world. And in this mission, we find ultimate comfort and peace.

REMINDER: Alt-Market’s winter donation drive is now underway! If you would like to support the publishing of articles like the one you have just read, visit our donations page here. We greatly appreciate your patronage.

Collapse Survivor: “Try To Imagine Yourself In The Worst Moments of Your Life”