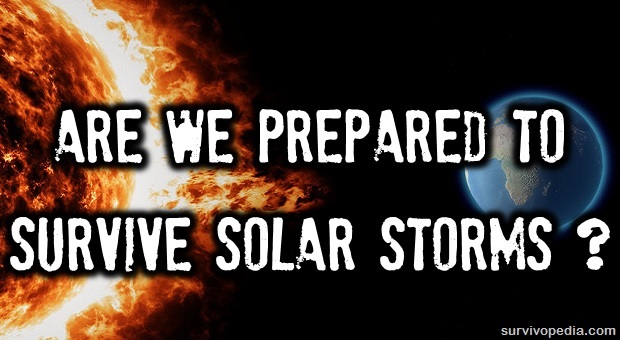 In the fall of 2014, we narrowly missed a major bump in the road, in the form of a solar storm. NASA had warned of its coming, getting their warning down to almost the day. This was to be the biggest solar storm to hit the Earth since the Carrington event in 1859. Fortunately for us, it missed the Earth, passing us by.

This type of storm is both unique and common. It is common in that the surface of the Sun is a constant burning explosion. Solar flares and storms happen all the time. It is rare, in that the solar superstorms which could cause us major problems don’t happen all that often; and when they do, like the one in 2014, they often miss the Earth.

The Superstorm Versus the Grid

For all practical purposes, a solar superstorm that actually hit the Earth would have roughly the same effect on the side of the Earth that it struck as an EMP.

Therefore, we could expect massive power outages, as transformers on the grid are destroyed, as well as a loss of massive amounts of sensitive electronic equipment controlling everything from our critical infrastructure to our entertainment.

In this case, the size of the storm, it’s length of duration and how directly it faced the Earth would all have a factor in how serious the damage would be. Some storms might merely disrupt communications on a temporary basis, while a major storm might destroy most of the electronics we depend on.

Should the electrical grid substations be damaged, which is a very real possibility with a larger storm, then repairs could take over a year. How much of an impact that will have will depend on how many substations are damaged and whether the possibility of rerouting electrical power for the affected areas exists.

Unfortunately, it came out in 2014 that the government has done little to nothing to prepare for such an event or that of an EMP. While the military has some units which are protected from EMP, as well as a few government offices, there isn’t enough protection to go around for all the departments of the government, let alone civilians and industry.

There is virtually no protection for the three power grids that serve the United States. Estimates of the cost of adding that protection are over one trillion dollars, making it impractical from a financial standpoint.

Even buying and stockpiling spare transformers to deal with such an event is deemed impractical. These are custom-built transformers and they take more than a year a piece to build.

Apparently, there aren’t standard designs which are used throughout the system, but rather each one is more or less an individual. So, a spare transformer for one sub-station probably won’t work for another. Should the grid get hit, chances are, it will go down.

There is one advantage with a solar storm, when we compare it to an EMP; that’s the warning we will have. Scientists know about 12 hours before these storms strike. So, if a reasonable means of spreading the word could be developed, those 12 hours would give people time to disconnect equipment and store it in Faraday Cages before the storm hits.

Of course, that wouldn’t be as easy for businesses and industry; but measures could be developed, which would allow those businesses to prepare for the solar storm and protect their computers and other sensitive electronics.

Alas, this probably won’t happen. Developing such a system is the type of thing that was popular in the 1950s, but would be looked at with scorn today. Few would truly accept the gravity of the situation and make proper preparations. Amongst those who did, all it would take is one or two false warnings and they’d stop listening to the warnings all together.

But then, this wouldn’t do a thing to help the power grid. So, even if individuals and businesses were to invest in developing the necessary protections to keep their equipment from being damaged in the case of a solar storm, without power from the grid, that investment would be useless.

The key to everything is to have readily available electrical power that we can use. That’s going to require major investments and major changes to the grid.

So, What Does This Mean to You and I in Real Terms?

First of all, it means that it’s not a matter of if a solar storm will hit the Earth, but when. Hand-in-hand with that, is the question of how severe said storm will be, which is measured in both magnitude and duration. Both will have an effect on how much damage they can cause here on Earth.

Since we are totally unprepared for such an event, the effects of a severe solar storm could be as bad as an EMP attack. According to the report of the EMP commission, that would have the effect of killing off 90% of our population in the first year, either due to illness or due to starvation.

Without the full infrastructure in place, many thousands of people won’t receive critical medicines that they need. While some will be able to survive this, many won’t. Even those that can survive without those medications will have severe effects, some of which will be debilitating.

Then there’s the food issue. The American agricultural industry is the most productive in the whole world. But it is dependent upon the transportation industry to move product from the farm to the processing plant and from the processing plant to distributors, ultimately bringing it to the retail outlets where consumers buy it.

Without electricity to pump fuel out of underground tanks or to refine petroleum into fuel, those trucks will come to a standstill. Farmers won’t be able to get their product to market and much of what they produce will be wasted.

This is an extremely grim picture, but it is a worst-case scenario. It is possible that the solar storm would not cause this much of a problem. But we really have no way of knowing. There is too little data to go by, although the data we do have indicates that the results would be akin to an EMP attack.

This is going to sound a bit far-fetched, but I need to throw it in here. There is a possibility that such an end game scenario is not only acceptable, but desired by a fair number of Washington insiders.

The Georgia Guidestones, which have the New Age Manifesto inscribed on them, state that the population of the world must be reduced to 500 million people. Apparently, if that means killing off 90 percent of our population, that’s totally acceptable. At least, it’s acceptable to some people.

This may explain why there is so little effort on the part of our government to do anything about preparing for a solar superstorm or EMP attack. Those events would play right into the hands of the elite, providing them with the utopian world that they desire.

The only way of ensuring survival is local self-sufficiency. I add the word local in there, as small communities working together could become self-sufficient enough to survive. Other than that, self-sufficiency will be limited to family units. More than anything, they will need to be able to produce their own food on an ongoing basis, in order to ensure their survival.

Other than food production, we would be faced with our country going back technologically speaking to a time about 120 to 150 years ago. The question then would be how quickly we could adapt to that lifestyle.

Once again, those in smaller communities would have the advantage, as many already have a closer connection to their past. But in addition to that, the crowding in major urban areas makes it all but impossible to return to that sort of lifestyle.

Living as our ancestors did requires space. Some people living in suburbia might be able to do it, assuming they have a source of water and are experts at gardening. But to raise any sort of livestock for meat requires a considerable amount of ground. That means living out in the country somewhere, where you can have several acres to work with.

As with any other survival situation, the advantage goes to those who are prepared. People who are growing their own food now and working on becoming self-sufficient, will have a much easier time adapting to life after such an event. Their biggest worry will be protecting themselves and their efforts, from those who have not prepared. If they can do that, they will be able to survive.

Power Grid Destruction Of The Third – And Worst – Kind

How to Protect Your Solar Gear from EMP (Part 2)

10 Lessons From A Multi-Day Power Outage