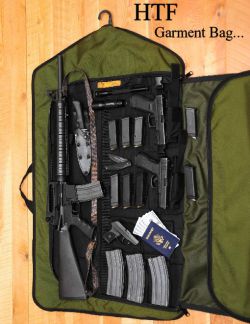 The cliché saying is “hiding in plain sight.”  Preppers need to be sensitive to being able to hide critical 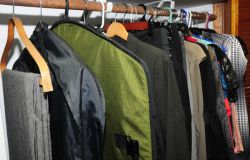 gear, supplies, and SHTF stuffs away from prying eyes, thieves, or anybody else that might be snooping around your house or storage areas.  This is why we advise keeping quiet and discreet about your prepping efforts, keeping equipment, gear, and support stuffs out of public viewing sight.  This goes so far as keeping the garage doors down when you are home or not outside or doing work around the house.

This includes locking storage rooms, closets, and other storage areas from “friends”, family or guests coming into the home.  Using unmarked, locked storage containers is another way to “hide” stuff.  There are any number of ways to secure and hide your SHTF weapons and at least one stash of a short rifle, handguns, ammo, extra magazines, and other related support gear in one hiding place.  Here is a review of a new piece of gear designed specifically to conceal your first line of defense gear virtually in plain sight just in case of an emergency.  This is a good piece of gear for either a Bug In or a grab and go bag out the back door.

Regardless of whether or not you are an official prepper or just interested in hiding some critical guns, magazines, ammo and other gear in a place that is not likely to be discovered either by a break in or any sort of ravaging during a SHTF episode.  The whole idea behind the Skinner “HTF” Garment Bag is to provide a unique place to “hang” several guns and other gear out of sight from anyone, virtually hidden in plain sight.  I mean walk into your closet and what do you see.  Clothing hanging on hangers from a support rod is an exceedingly common sight in any house or apartment.  Shirts, pants, suits in bags, coats and other items just lined up.

Nothing there hanging in a closet should appear out of context or secretive.  Think about it.  If you were pillaging through a house as a common break in thief or some ganged up zombie during a SHTF are you going to check out the sizes of the shirts and pants hanging up in a closet.  Would a dress suit be high on your list of stuff to steal?  I don’t think so.  So this is the primary premise behind a common looking garment suit bag hanging in a clothing closet or hallway coat closet among many other suit or clothing storage bags.  When the closet door is opened, it should just look like an ordinary closet with nothing out of place.  But hidden there could be a secret cache of emergency self-defense gear. 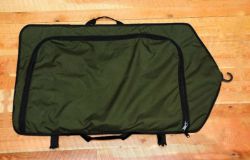 Upon initial examination of the Skinner HTF Garment Bag once it is unzipped to reveal the internal design features, you simply have to say “wow.”  I took just a while to really study the inside layout of this new piece of gear.  To simply say it is well designed and completely thought out is a sort of understatement.  Upon building it out, inserting all my gear items, and hanging it up in the closet, I am not sure there is a thing I would change.

Everything about this product is heavy duty.  The bag hanger is super heavy duty despite being made of molded plastic.  One would really have to abuse this hanger to break it.  I mean it was created to support the weight of all the gear this bag will hold, so it is definitely up to the task.  The bag’s zippers and pulls are heavy duty and designed for frequent, problem free use.  With twin zippers from the top and the bottom of the bag, the user can decide which zipper orientation they want to use that it best for them.  I have tried both zippers positioned at the top and then to the left side so they could be unzipped in opposite directions simultaneously.   You can play with this to see how you like the closed zipper placement best.

Let’s review the inside features from top to bottom.  The heavy duty hanger slips through a double sewn opening in the top of the bag for hanging the bag up on a closet rod.  There is a sort of an overlapping cover as well that is part of the outside zipper closure of the bag.  In the very top of the bag is a horizontal pouch for holding a flashlight with a hook and loop flap closure to secure the light.  The pouch is not overly large so you may have to try several different flashlight models to see which one fits well.

On the left side of the bag is a position for a rifle such as an AR or AK up to 40-inches in length.  The 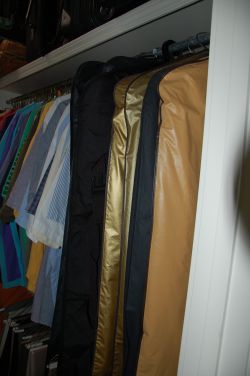 buttstock fits down in the bottom of the bag in an open slip pouch and the handguard/barrel is secured by a Velcro strap at the top.  There is ample room here for a scoped rifle with a magazine inserted if desired.  The muzzle of the barrel fits up under the top of the bag cover.

On the right side opposite the rifle containment are two removable holsters held in place by Velcro.  These are positioned one on top of the other with the holstered handgun secured by a strap with a heavy duty locking clip buckle.  The holsters look to be mainly designed to hold pistols, but I inserted a .357 Smith and Wesson N-frame revolver just to see how it fits.  The weight of the revolver caused the holster to sag a bit outward, but upon tugging at it, I do not think it would become detached or come lose.   Each holster also has a dedicated attached pouch to hold one magazine with a flap closure.

Just to the left of the pistol holsters are pouches to hold six additional pistol magazines with flap closures.  Further left of the pistol magazine pouches is a vertical pouch for holding a large knife with scabbard or possibly another piece of gear, perhaps another larger flashlight.  Below the bottom holster are two accessory pouches to be used for a variety of small gear items.  These pouches could hold extra lose ammo, revolver speed loaders, or perhaps even a small concealed pistol like a Beretta Pico, KelTec, or Kahr handgun.  They could also be used to hold critical medications, extra batteries, a pocketknife, some power bars or whatever.

At the bottom of the bag are three pouches to hold rifle magazines.  They are long enough to easily 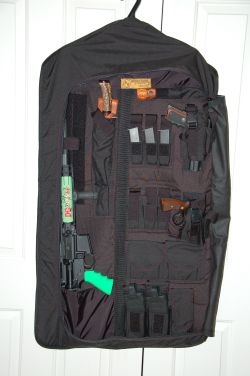 accommodate 30-round AR magazines with no issues.  These are also secured with fold over flaps using Velco to hold the mags in place.  Sewn down the center of the bag is a nylon strap with the function of giving the bag additional stability and form I would imagine.  Keep in mind when this bag is fully loaded it is going to be pretty heavy especially with all the magazines loaded to capacity.  Once the bag is geared up, the outside of the garment bag is zipped closed to hang up.  I think a small padlock could be put on the zipper pulls.  Also quite unique is the fact that the bag can then be laid out (on the bed or table) and folded in half to be secured by two sewn on external straps with snap closure buckles.  The outside of the bag also has two sewn on wrap around carry handles to tote the bag like a piece of luggage.

Unobtrusive hanging in the closet?  Yes, but note upon unusually close examination of stuff hanging in a closet this bag will stand out somewhat.  Clearly the heavy duty hanger could be noticed as something different.  The external carry straps and wrap straps could be noticed attached to the bag.  I recommend when hanging the Skinner Garment Bag in the closet to fit it in between other suit or coat bags to further obscure its presence.  I seriously doubt it would ever be noticed hanging among all the other clothes or bags.

This bag is constructed of heavy duty cordura black fabric with tough stitching.  I have seen photos of the bag in dark green.  I think the black is a better choice as it tends to blend in more appropriately as a garment bag.  The retail pricing is $179 and can be ordered direct at www.skinnersights.com.  So, whether to hide out in a closet or fold over for a grab bag, the Skinner “HTF” Garment Bag is an alternative way to secure an essential cache of weapons, ammo and support gear out of sight in plain view.