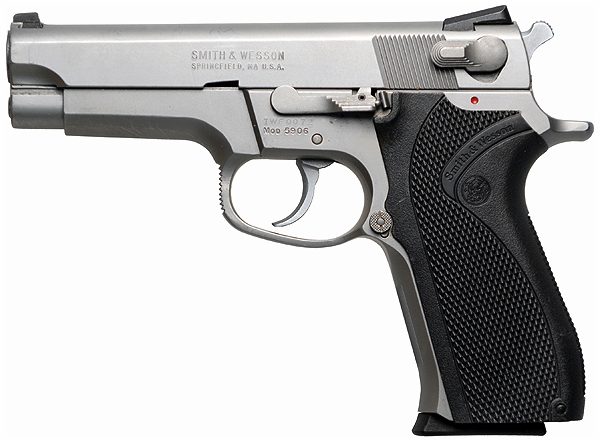 Is there really a “best” of anything?  Well, yeah, I think A-1 steak sauce is the absolute best.  I love 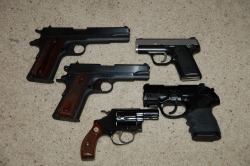 .  Diamond D Leather in Alaska makes the best across the chest crossdraw handgun holster on Earth.  I am a huge fan of Kimber 1911 pistols, Smith and Wesson heavy revolvers and ARs in 5.56 and 300 Blackout, and my Ruger SR556-6.8 SPC AR (just try to find one of those left on the shelf), which I clearly think are the best.  Well, at least those are the best for me anyway.

When I work the gun shows with the Glock armorer guys, I usually get many of the same questions at our show 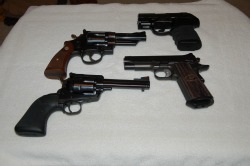 tables.  “I want to buy a first handgun for my wife.  What caliber should I buy?”  That question is often quickly followed by the No. 2 question, “Should I get a revolver or a pistol?”  Several other questions almost always follow that.  I try to offer the best council I can based on what I know about their situations, conditions, and experiences.  I’ve done this for over 40 years now.

I get nearly the same series of questions from people inquiring about the “best” caliber for survival prepping.  These questions are more difficult to comprise to offer individuals specific recommendations.  Many factors go into the decision to pick a handgun caliber for survival work and then to pick the platform to fire it.  Let’s explore some of the possibilities.

As it is with spotting a seemingly attractive woman at a distance, looks can be deceiving especially upon closer examination.  It is much the same with factory ammunition ballistics charts as well.  Unfortunately these listed factory muzzle velocities and energy ratings are about all we have to go on when it comes to comparing one caliber against another.  It does at least offer us a baseline for comparison.  Reality in the field is something entirely different.

Know, too, that this list contains only the most basic bullet and power level for each caliber.  Many, many other choices are available in bullet types, and power capacities.  Get yourself a factory ammo catalog from Remington, Winchester, or Federal to begin to understand the other options available in each caliber.

First, as you make the ultimate decision to arm yourself, your immediate family and/or your survival 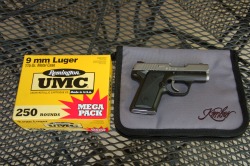 prep team, ask yourself exactly why for what purpose(s).  I will presume the No.1 reason is for self-protection, as well as defensive protection of family, home, and property.  Other reasons could be for foraging for wild game food, or offensive actions to secure goods for yourself under the most dire straits of circumstances.  For whatever reason you buy a gun(s) for a prepping assignment do not take the purchase of weapons lightly and be fully prepared to accept all the consequences.  This includes safe handling, learning to shoot properly, practicing to shoot, and maintaining your tools in top operating condition.

You may have already settled on some prejudiced decisions about what handgun caliber you want to obtain for prepping use.  They may be right on or not for you or others in the immediate circle you intend to arm.  Seek as much input as possible from people who should know what they are talking about.  Good advice on guns does not always come from behind the counters at a gun store, in particular the big box retailers where gun sales people are rarely well trained on guns or ballistics.

Try a shooting range, a shooting course, or a concealed weapons course.  Walk around a gun show and ask several vendors as you check out their wares.  That is a next step anyway once you finally (maybe) settle on the caliber(s) you want then go shopping for and the handgun models to deliver them.

Meanwhile study these ballistics numbers and try to make some obvious judgments.  I am guessing 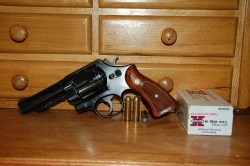 you have probably done some preliminary reading or research on line, from contacts, at gun shops or shows, books, magazines or other resources.  If not, then you definitely need to build an elementary foundation of knowledge on these subjects enough to know on what to spend your hard earned prepper money.  If you make a mistake, you waste money.

If you need a hint, then take this one.  If your primary purpose for obtaining weapons is to protect yourself, family, friends, or others, then you obviously need a handgun shooting a caliber as capable as possible in stopping an adversary. Be honest with yourself.  While a .22 LR rimfire handgun may be ideal for taking small game for the meat pot or taking out small nasty vermin around the Bug Out camp, it is not a realistic choice for self protection.  It is better than nothing, but not for your primary defensive handgun. 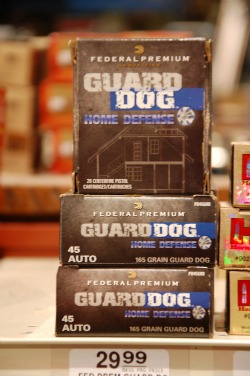 prominent caliber handgun for defense and become proficient with it, then you can branch out to consider acquiring other calibers and guns as your budget allows.  These three could make decent back up calibers with proper ammunition.  Now we have arrived at a “Y” in the road.  Whether or not you want a revolver or a pistol?  I won’t discuss those merits or distracters here, but may at another time review those points.

Generally speaking the .41, .44 and .45s are not considered for personal protection though they could be.  Eventually if you are settled on revolvers, then consider stepping up to a larger caliber.  By the way, the .44 Magnum will also load and shoot the .44 Special.  Remember these calibers are more difficult to shoot well, costly, and the ammo is heavier to deal with for storage and carry.

The other pathway in the “Y” considers the semi-auto pistol calibers.  These are the 9mm, .40 Smith and Wesson or “40 cal”, the 10mm and the .45 ACP.  The 9mm is basically a .38 caliber suited to the pistol platform.  The .40 and the 10mm are similar though the 10mm is considerably more powerful, expensive and has more recoil.

The .45 ACP is the “King of the Hill” for most pistol shooters.  Obviously it was picked by the military early in the 1900s for a reason.  There are rumors now the .45 ACP may be coming back to service use, but somehow I suspect it will only be relegated to specialty team use.  The .45 ACP has more recoil, more noise, but the 45 caliber is a serious man stopper.  It takes a lot of practice to shoot well, as frankly does any handgun in any caliber for that matter. 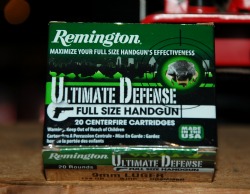 has a wide variety of gun models and calibers to actually shoot.  This way you can evaluate your comfort level in shooting different calibers and the types of guns available in those caliber choices.  It would be akin to test driving new cars.

Now, here I go out on the limb by suggesting my own recommended choices.  If you favor the revolver action because of its simplicity in use without mechanical safeties to deal with, then I would opt initially for a .357 Magnum, but not a lightweight, short-barreled gun model.  Pick a good steel gun with a six-inch barrel and adjustable sights.  If you learn to use this well, then you might consider adding another bigger caliber much later.

For pistol operators, the base choice is the 9mm.  It is very universal in all regards, and widely available both in gun models and ammunition types.  Practice with ball ammunition, but carry in Condition One with a serious self-defense round of which there are many new ones on the market now.

Personally, I am not a big fan of the .40SW.  It has more recoil, and muzzle blast.  Ammo is more expensive.  However, the .40 is an effective pistol caliber for personal protection.  I do like the 10mm but it is a significant step up in skills to shoot well.  It is a good defensive people stopper using the right ammo.

The .45 ACP is my No.1 personal choice.  That big .230 grain bullet packs a wallop on its opponent especially in a defensive round with expanding bullets, not the ball ammo.  The .45 takes much practice to shoot really well, but in close quarters it is a deal changer.  It is not a first caliber choice for uninitiated neophyte shooters.  If I were starting afresh to build a self-defense survival handgun arsenal, then I would have a 9mm and then a .45 ACP.  If I had multiple guns, they would all be the same brand and model for uniformity of training, and use as well as exchange of magazines, parts, cleaning supplies and carry holsters.

Is there a best handgun caliber for survival prepping?  Yes there probably is for you, but it may not be the same one for me.  What is really best is what you can shoot really well.  Obviously one or more well placed rounds are better than making a bunch of noise and missing the target.  Study hard, pick carefully, and then become extremely proficient with your choices.  That will be what is best for you.

7 Reasons to Take an Air Rifle for Survival Weapon