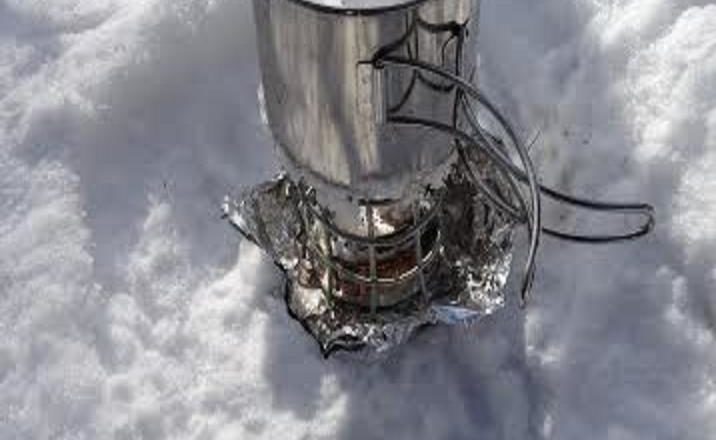 I’ll admit it, I’m a cheapskate. But for good reason…I cheap out on a lot of things so that I can have really really good stuff in other areas. For instance, I’ll eat store-brand taco shells for dinner and have peanut butter sandwiches for lunch so that I can afford that Troy free-floating battlerail for my AR. (review soon). I’ll buy eight-packs of t-shirts at Wal-Mart so I can get the BF Goodrich AT tires for my Tacoma. It’s pretty simple, and I’m sure everyone here does it to some degree when it comes to their gear. However, there was this one time I cheaped out on gear, and it actually worked out pretty damned well.

I was looking for a good portable stove for my BOB about a year ago. Hoping for reviews or ideas, I checked the search function here on the blog to see if Jarhead Survivor or Calamity Jane might have tried one that worked well. Hopefully it wasn’t exactly pricey! A search found this article by Jarhead Survivor, circa 2010: “How to Build Your Own Alcohol Stove” BAM! I was pretty tickled pink. I’m the kinda guy who would much rather build something that works well on the cheap (and learn something along the way!) than spend money on something that came off a shelf with nothing but the side of its box to tell me about it. As a bonus, this particular alcohol stove was pretty cheap: its cost was two previously enjoyed frosty beverage cans, (of the red, white, and blue 16-oz. variety…I don’t drink that sissy Coke Zero stuff like Jarhead used in his article.), a handful of pink R-19 insulation (nabbed from my attic roof), a razorblade, and a thumbtack. For fuel, Jarhead used HEET gas line antifreeze (as a side note, ONLY USE THE YELLOW BOTTLED HEET! The red bottle has fuel injector cleaners that are poisonous when burned.). I whipped up a couple…and you know what? They worked pretty well! I’ve used mine quite a bit over the past year, and I have mostly good stuff to say about them. They are extremely lightweight, take up very little room, and they will heat up a cup of water for coffee or soup with no problem. Downsides? They get HOT, and you need to pay attention to that – but I guess that’s a natural byproduct of fire in general, huh? They need something stable and flat to sit on, especially in snow. I found that out here: 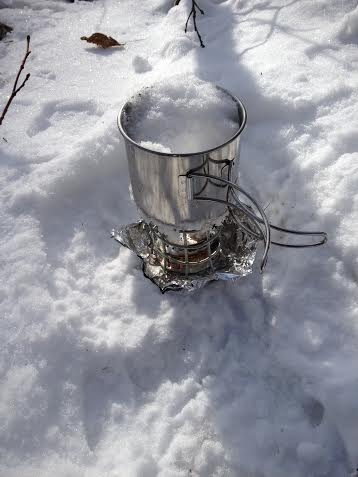 Yep, this definitely melted through the snow and fell over. Bogus. Shoulda been smarter than that!  If the platform they are on (a large rock, for instance) isn’t relatively flat and level, the top-heavy container of water perched above the stove can (and probably will) tip over. If all you have is a couple cups of water you were able to filter out of a less-than stellar-looking bog hole, and you REALLY need it, your day will be instantaneously ruined by the lack of forethought to find a flat surface. 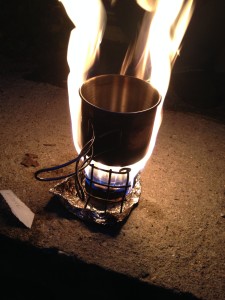 The last thing I didn’t like about it was not really a big deal; you have to accept it, since it comes with the territory of having such a small, DIY stove: it only burns for a few minutes, and then you have to let it seriously cool before you fill it, lest you find yourself in close proximity to a small aluminum grenade you made yourself. But, like I said, you have to accept it; it’s the trade-off for spending approximately zero dollars, and having an extremely portable, lightweight stove.

I know Jarhead said to use HEET, and that’s what I had been using. But a quick perusal of all the flammable shit I had in my shed made me think there MIGHT be a different fuel out there that might burn more efficiently. So, by God, I went all Mythbusters on it and brought in a bit of science. I measured how much fuel my little stove could handle (about four tablespoons) and decided on this course of action: Use equal amounts of different fuels (all readily-available flammables people might find in abandoned sheds or homes) and use it with my stove setup (the very one I carry in my BOB) to see how long it A) takes to boil a pre-determined amount of water (One cup) and B) burns for. So, armed with a bunch of stuff that could burn me, a pad of paper, a pen, and the stopwatch on my iPhone, I set up on my concrete front steps to see what I could find out. 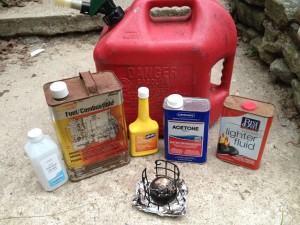 What did I find out? Well, for one, they all worked with the stove, and none of them kersploded it, leaving little pieces of Pabst can in my face. Some definitely worked better than others, and some burned cleanly, some were a mess. They all ignited very easily with one or two strokes of my FireSteel GobSpark Armageddon. Some of these (like the gasoline) will melt through plastics, requiring you to put a bit of thought into your container if you decide to carry them.

For this test, I used 87-octane gasoline (don’t tell my wife I was supposed to mow the lawn with it.) white gas (or “Coleman fuel”…as most of Coleman’s products  run on this stuff or propane.), 91% Isopropyl (rubbing) alcohol, Gas-Line Antifreeze (HEET), Charcoal Lighter fluid, and acetone. Ambient temperatures were about 50 degrees, and the only casualty was a ferociously stupid june bug that flew at high velocity right into the stove…I may have lost a few eyebrow hairs too, but such is the price I pay for science. Here are my notes on the various fuels…”Boil” was a nice rolling boil, “burned out” was the flame COMPLETELY out. Again, I used four tablespoons (two ounces) of fuel per test. Don’t tell my wife I used her cooking measuring stuff, okay?

GASOLINE: One strike with firesteel, explosive! (there was a fun fireball with this one, boys and girls! Be careful!). Large, dirty burning, orange flame about 12″ high. TIME TO BOIL: Didn’t boil a cup of water (!), burned out in 5 minutes, 32 seconds.

WHITE GAS: One strike with firesteel, burned quickly, with a nice flame. TIME TO BOIL: 2 minutes 42 seconds, burned out in 5 minutes, 8 seconds. 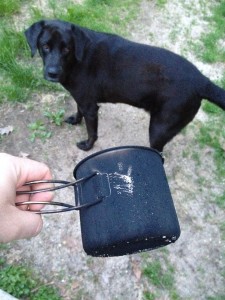 As you can see, things got rather dirty. I noticed the petroleum-based products (gasoline, lighter fluid) burned very high, sooty flames. (No, they didn’t turn the dog black.) There was a lot of nasty soot and residue left over on the stainless cup and the stove, which were absolutely appalling to remove from anything it touched – clothes, fingers, skin. Additionally, they didn’t burn that efficiently – hell, the gasoline didn’t even boil water. It could be used to cook or heat, I suppose, but truthfully, I wouldn’t want whatever that stuff was all over the cup and stove to be all over my food. So, in a last-ditch case, it will work, but I’d keep looking for the other products if I could.

Alcohol based fuels did the job much better. They burned hotter (blue flames) and cleaner (very little residue on the stove and cup), and longer, with the champion going to the 91% rubbing alcohol. This bad boy burned hot for over nine minutes on 2 ounces of fuel, trumping the others by over 30%. As an added bonus, it’s VERY inexpensive and easy to find (about 2 bucks a bottle or less at pretty much ANY grocery store or drugstore) and it can be used to clean wounds and disinfect.

I still use the HEET (since I have it) but once it runs out (or I say “screw it” and use it for its actual intended purpose of keeping water out of my vehicle’s fuel tanks), I’ll be carrying around a bottle of 91% Isopropyl rubbing alcohol in my BOB for fuel. I’ll have to make another little DIY stove after all this testing and use…but it’s given me a year’s worth of service after spending about 10 cents for it. I think it deserves the retirement.

What do you guys think? Was this a fool’s errand? I liked this test because it worked with a VERY inexpensive tool that is extremely useful within its limitations, and it uses materials that can readily and easily be scrounged, even in a down-and-dirty SHTF environment/situation. Would you rather carry around a bottled-fuel stove? Or do you just go old-school and make fires?

DIY Pemmican: Bread of the Wilderness

DIY Survival: Make The Most Of 7 Trash Items