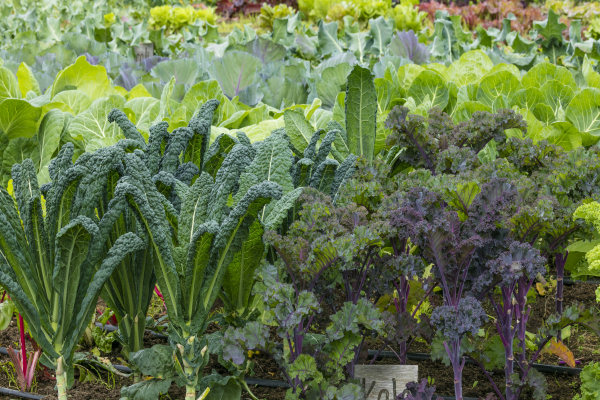 The virtues of kale have been extolled for so long that we almost feel guilty for not eating it. And it is one of the longest lasting vegetables in the garden.

There are those who say they don’t like kale. How is that possible, others are compelled to ask? The taste is mild with just a touch of bitter. It is earthy, heartier than lettuce, more flavorful than spinach. Different varieties appeal to different tastes. Some prefer the very dark, lance-like leaves of lacinato kale, while others choose the huge, blue-green of the Russian and Siberian kales. Scotch curled kale is tougher, but full of flavor.

Cooked or raw, all types can be used in a multitude of ways. Here are just a few:

First cut the leaves from the tough stalks and slice them in skinny slivers, and then combine with something sweet, to balance the bitter, and something peppery. For example:Add chopped oranges, diced apple or pear, or pomegranate seeds, thinly sliced red onion, and a fruity balsamic to a bowl of thin kale strips, and drizzle with olive oil. Top with shaved parmesan cheese. Chopped toasted almonds or peanuts also make a good topping. Season with salt and pepper.

A classic, this soup is rich in garlic and earthy goodness. Cook half an onion, a clove of garlic, and a small amount of chorizo sausage in olive oil until the onion is soft, then add a bunch of chopped kale and cook until it is wilted. Add a can of beans and a quart of vegetable or chicken broth, bring to a boil, and simmer for about 20 minutes, Season with salt and pepper.

Chop kale leaves into small pieces and add to your omelette, along with onions, mushrooms, red pepper,garlic, and sea salt.

Simply toss chopped kale and garlic in olive oil, and top your pre-baked pizza dough with it. The baked kale will take on a crispy texture. Be sure to use fresh mozzarella and plenty of parmesan cheese.Mushrooms make a tasty add-on.

Compared to other brassicas, kale is an easy grower. It germinates readily and, being biennial in nature, produces leaves from spring through fall, and even into the winter in some regions. Come spring, if you haven’t pulled it out, it will erupt into yellow bloom, a boon to spring pollinators.Set young plants out about a month before the last frost, or sow seed directly once the soil warms. In mild-winter regions it will persist all winter.

Like other members of its clan, kale attracts a few insects

Cabbage worms (larvae of the cabbage white butterfy), cabbage loopers (moth larvae), and other larvaecan skeletonize kale leaves, if you let them. Keep an eye out for natural predators, and encourage their presence.

•Carnivorous wasps often prowl the leaves of kale and cabbage, and devour the larvae.

•Tiny braconid wasps parasitize the larvae, and hatch from fuzzy white or yellow pupae on the undersides of leaves.

•Spidersare also predators of cabbage worms. Encourage them by laying down a loose layer of mulch.

Other measures that you can take, if predators don’t keep pest populations in check:

•Cover your kale with fabric row cover to keep the butterflies and moths from laying eggs on theleaves.

•Spray with BT (Bacillus thuringiensis), a control made from a naturally occurring soil bacterium that targets specific larval pests.

Grey/green cabbage aphids cluster in the crinkled leaves, or where leaves meet the stem, and can become especially problematic late in the season. Prevention is the key, as once these pests settle in, they are nearly impossible to control.

•Encourage predators such as lady beetles, lacewings, and parasitic wasps by planting lots of flowers. •Inspect your plants often, and if you notice aphids on a leaf, break off the leafand dispose of it, or wash off the aphids with a stiff stream of water.

•Be sure to clean debris from the garden bed at the end of the season. Cabbage aphids can overwinter in dead leaves

Harlequin bugs can be difficult to control.

•Scout for their distinctive black and white eggs, and destroy them, as well as any nymphs and adults you find.

•Frequent vacuuming of the bugs can also be effective.

•If you have a problem with this pest, be sure to clean debris and weeds from your garden bed to prevent overwintering.