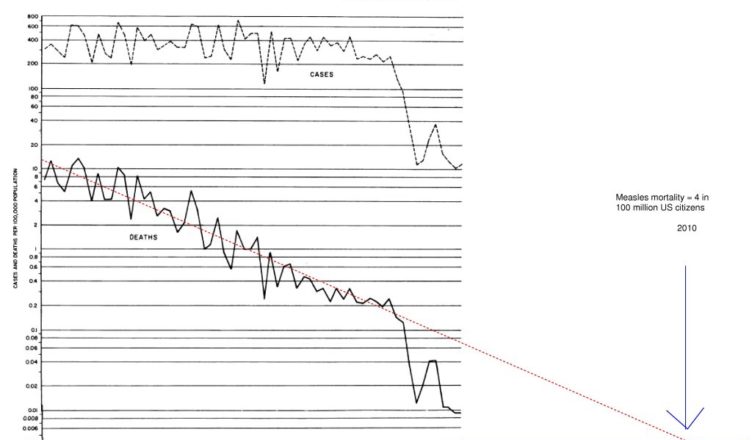 Never mind the right to life, liberty and the pursuit of happiness and other basic freedoms that uphold parents’ rights to make decisions about the health care their children receive.

Never mind the evidence that vaccines aren’t as effective as their makers have promised.

Shutter to think, according to the Office of Medical and Scientific Justice, “the theory of ‘herd immunity’ is failing or was flawed to begin with” while a 2014 Council on Foreign Relations report found:

“the most highly vaccinated populations are also those with the greatest number of outbreaks for those same infectious diseases. This was especially the case for measles, mumps, rubella, polio and pertussis outbreaks,” with the U.S. Canada and rest of the Western world leading the list.

Never mind all that.

For many, the measles outbreak at Disneyland is the proof that this matter should no longer be a choice.

Already, an unvaccinated Pasadena woman has been forcibly quarantined after her sister contracted measles.

But it is going further.

Parents who do not vaccinate their children should go to jail.

Anti-vaxxers often claim the right not to put “poison” in their children’s bodies. That is ludicrous. A mountain of data has demonstrated that vaccines are safe and effective. Insisting otherwise is akin to believing that the moon landing was faked.

Tell that to the parents of Keira Driscoll, a five year who died from very strain of the flu that she was vaccinated against just three days after receiving an immunization.

Or the 15,000 families that have had little other recourse than to file claims in the National Vaccine Injury Compensation Program after serious injury or death to their child since the program was created in 1988.

The benefits of vaccination have been systematically oversold for one obvious reason – to drive sales with public health mandates and a huge booster of fear – for the profit of Big Pharma.

And this push has not been harmless, it has put many people at risk and devastated families – all because margins of known risk from the vaccines have been accepted as a minor casualty in the effort for the “greater good.”

Measles is perhaps the most infectious human disease. Virus particles can remain in the air for up to two hours after an infected person leaves. And measles is not a minor infection. The World Health Organization (WHO) reports that before widespread vaccination began in 1980, 2.6 million people a year died from measles. About 400 people a day still do.

Put simply, no person has the right to threaten the safety of his community. Like drunken drivers, the unvaccinated pose an imminent danger to others. They pose a lethal threat to the most vulnerable: the immunocompromised, such as HIV or cancer patients, and infants who have yet to receive their vaccines.

However, this propagandist fails to point out, or perhaps even comprehend, that the real reason behind these deaths, though still quite tragic, is compromised immune systems – not the disease iteself. The vast majority of these deaths occur in populations who live without basic conditions of clean water, sanitation and sufficient levels of essential vitamins in their diet.

Like the flu, it tends to kill those who already have weakened or underdeveloped defenses against illness.

“Not meningitis, not the plague, not Ebola, they’d get measles. Measles is almost an always a benign childhood illness.“

Mortality from Childhood Diseases Was Declining Before the Vaccine Arrived

Overall, studies have shown that rising standards of living have done the most to decrease mortality from infectious disease – not vaccines.

The following chart shows that while the measles vaccine, first introduced in 1963, dramatically decreased the number of measles cases, the number of deaths from measles was already in a downward spiral, thanks to general advances in reducing childhood mortality, in part due to social focus on improving nutrition and hygiene. 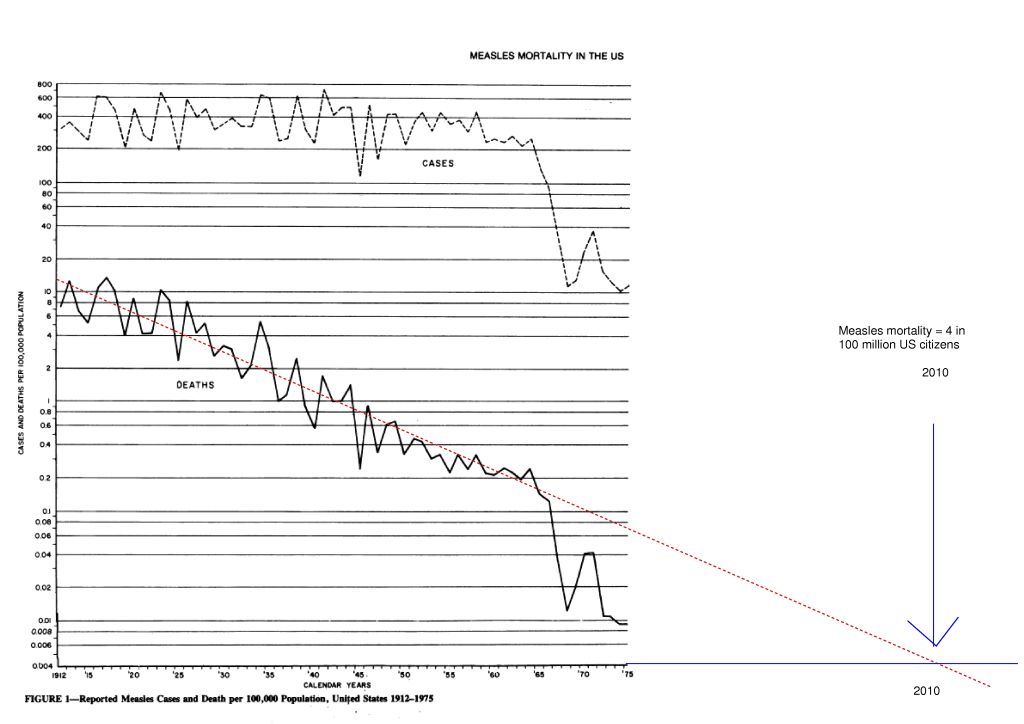 Prior to vaccinations, the vast majority of children who contracted measles in the United States caught the disease, endured it, built up their own bodily defenses, and recovered, often after spreading it to other children who also endured it much in the way children spread chickenpox to one another, often intentionally.

Today there are vaccines for these diseases and more, with plans to roll out vaccines for every conceivable disease under the sun or in the known galaxy. Many parents, doctors and advocates have argued there are now simply too many vaccinations on the schedule for most children to handle, increasing the risk of side effects. Some 30 rounds of vaccines (plus an annual flu shot) are recommended by the CDC in a child’s first six years of life.

Side Effects of Vaccines Outweigh the Dangers of the Disease?

But as the number of cases as well as deaths shrunk, the admitted risk of side effects from the vaccines themselves have overshadowed the risk of the disease.

Hence, many parents have opted out of them, based on a mix of supporting data, precautionary apprehension and, of course, word-of-mouth rumors.

After all, it was the MMR shot – the vaccination for measles mumps and rubella that started the whole “anti-vax” affair – prompting significant numbers of parents to opt out of vaccines for their children en masse, and inadvertently triggering panic in the powers-that-be.

Undoubtedly the Disneyland measles outbreak is being used by the media not only to demonize parents who choose not to vaccinate, but to shame and intimidate them as well.

The media will no doubt point out the many well meaning parents who believed the “rumors” about the MMR vaccine jab being linked with autism – stirred up by the research of Dr. Wakefield, who was accused of fraud and stripped of his medical license.

But the media will probably NOT be pointing out the revelations of the CDC whistleblower who just admitted that the massive study conducted by the CDC to especially to counter the alleged link between MMR and autism was itself fraudulent, and fudged the data to hide increases in autism risk tied to certain statistical populations. Lawsuits have since been filed.

Few have heard the leaked audio of the same CDC whistleblower discussing research linking “tics” linked to mercury in vaccines, noting that he would personally NEVER give his own pregnant wife a flu shot (which contains mercury as the preservative thimerosal). Doctors, however, recommend that pregnant women receive the shot.

But for the masses, those are just background issues most will never even be aware of.

The drumbeat is mounting for a new push to legitimize vaccinations, and recoup the profits that have been lost to falling vaccination rates and, as usual, by scaring up an issue.

God help us. Society is made up of sheep.

“I don’t feel safe with a gun in my house”: Gun Control PSA Tells Kids to Steal Parents’ Guns, Turn Them in at School