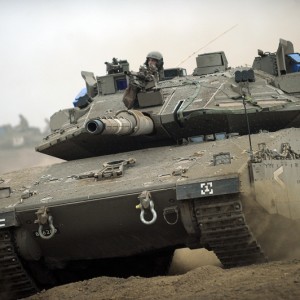 Israel and Hezbollah are at war. On top of everything else that is going on in the world, now we have a new war in the Middle East, and nobody is quite certain what is going to happen next. Israel has been preparing for this moment for more than 8 years. So has Hezbollah. According to some reports, Hezbollah has amassed an arsenal of 50,000 rockets since the end of the Hezbollah-Israel war in 2006. If all-out warfare does erupt, we could potentially see tens of thousands of missiles rain down into an area not too much larger than the state of New Jersey. And of course the Israeli military is also much more sophisticated and much more powerful than it was back in 2006. If cooler heads do not prevail, we could be on the verge of witnessing a very bloody war. But right now nobody seems to be in the mood to back down. Hezbollah is absolutely fuming over an airstrike earlier this month that killed six fighters and a prominent Iranian general. And Israeli Prime Minister Benjamin Netanyahu says that Israel is “prepared to act powerfully on all fronts” in response to a Hezbollah ambush that killed two Israeli soldiers and wounded seven. Just such an incident is what sparked the war between the two sides back in 2006. But this time, a conflict between Israel and Hezbollah could spark a full-blown regional war.

Earlier this month, Israel launched a surprise assault against a group of Hezbollah fighters that Israel believed was planning to conduct terror attacks inside their borders.

But in addition to killing six Hezbollah fighters, a very important Iranian general was also killed. Needless to say, Iran is furious…

Iran has told the United States that Israel should expect consequences for an attack on the Syrian-controlled Golan Heights that killed an Iranian general, a senior official said on Tuesday.

And we didn’t have to wait too long for a response. An IDF convoy was hit by anti-tank missiles near the Lebanon border. Two Israeli soldiers were killed and seven were wounded. The following is how the Jerusalem Post described the attack.

In the heavy Hezbollah ambush, a military D-Max vehicle containing a company commander and his driver from the Givati Brigade was the first vehicle hit.

This prompted all of those inside an IDF jeep behind it to quickly evacuate their vehicle before it, too, was hit and destroyed with missiles.

Just over an hour after that attack, mortar rounds struck an Israeli military position on Mt. Hermon.

In response to those strikes, the Israeli military hit back at Hezbollah positions on the other side of the Lebanese border…

Israel struck back with combined aerial and ground strikes on Hezbollah operational positions along the border, the military said.

At least 50 artillery shells were fired at the villages of Majidiyeh, Abbasiyeh and Kfar Chouba, according to Lebanese officials.

But Israel is probably not done.

Prime Minister Benjamin Netanyahu is promising a “disproportionate” response to the Hezbollah attacks, and he says that Hezbollah should consider what Israel recently did to Hamas before taking any more aggressive action…

“To all those trying to challenge us on the northern border, I suggest looking at what happened here, not far from the city of Sderot, in the Gaza strip. Hamas absorbed the hardest blow since it was founded last summer, and the IDF is ready to act with force on any front.”

If things continue to escalate, we might not just be talking about another Hezbollah-Israel war.

In the south, tensions between Israel and Hamas remain near all-time highs. In the event of a full-blown war, Hamas probably could be easily convinced to join the fray. And if Hamas jumps in, the rest of the Palestinians might not be far behind.

In addition, ISIS now has territory near the border with Israel…

Because of the strategic importance of the terrain, Iran and Hezbollah have been building infrastructure there for some time. But their interest in the Golan skyrocketed in December.

The reason: ISIS gained a foothold there when the Yarmouk Martyrs Brigade of the Free Syrian Army “defected” from the de facto alliance with the U.S.-Arab coalition against Assad, and declared its allegiance to ISIS. The Yarmouk Martyrs Brigade had been one of the most active rebel factions holding territory directly adjacent to the “area of separation” between Syria and Israel administered (in theory) by the UN. In particular, it has held the southern line of confrontation with Syrian regime forces, in the transit corridor leading to the Quneitra border crossing.

Needless to say, ISIS would be extremely interested in any conflict with Israel.

And of course there are all of the other surrounding Islamic nations that are not too fond of Israel either.

The truth is that the Middle East is a perpetual tinderbox. One spark could set the entire region on fire.

Meanwhile, Barack Obama continues to do all that he can to undermine Israeli Prime Minister Benjamin Netanyahu.

The animosity between the two is well known, and now an “Obama army” of political operatives has been sent to Israel to help defeat Netanyahu in the upcoming elections.

The “leader” of this “Obama army” is Jeremy Bird, who was the national field director for Barack Obama’s 2012 presidential campaign. But he has plenty of company. Just check out the following list that was compiled by WND…

As the first month of 2015 wraps up, our world is becoming increasingly unstable.

In addition to the oil crash, the collapse of the euro, looming stock market troubles, civil war in Ukraine, tensions with Russia, an economic slowdown in China and imploding economies all over South America, now we have more war in the Middle East.

And if lots of missiles start flying back and forth between Israel and Hezbollah, it could potentially spark the bloodiest war in that region that any of us have ever seen.

So what do you think about the conflict between Israel and Hezbollah? Please feel free to share your thoughts by posting a comment below…

The post The Next War In The Middle East Has Begun And Israel Vows ‘To Act Powerfully On All Fronts’ appeared first on The Economic Collapse.