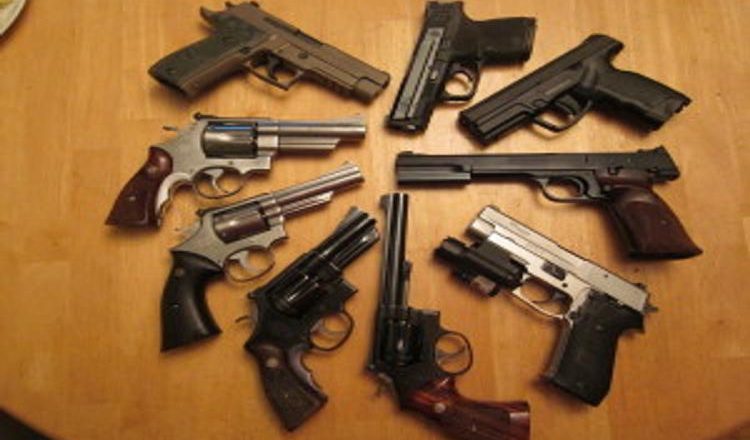 If you own firearms, you certainly want to keep them safe and secure. However, if you are a prepper you need to be particularly concerned about firearms being secure both at home before or during a Bug In. 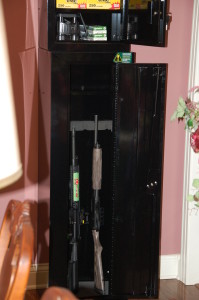 For an executed Bug Out there is an equal need for in-transit security procedures as well. But then especially during a Bug Out escape and in event of either a short term or prolonged hideout escape scenario, steps need to be planned and followed to make sure you maintain control of your firearms, ammo, and related gear.

The balance of security has to be a fine line between keeping firearms locked up from internal prying little hands and eyes, or unauthorized adults pilfering around the house and the requirement to access them quickly when the immediate need arises.

Following a real life practical plan a prepper friend of mine uses, let’s consider some thoughts, tips, and advice for implementing a fairly comprehensive firearms security plan as part of an over all prepper strategy. Surely we won’t cover all the potential bases, so consider this just an initial starting place in any plan you develop.

A home firearms security plan is what I would classify as a no-brainer whether you are a survival prepper or not. Let’s not be party to contributing to another home bound firearms accidental shooting where a kid or somebody else got a hold of an unsecured gun and shot somebody. These events often end in dire results.

Case in point I have secretary at work whose son was involved in an accidental discharge of an unlocked firearm at home and he is now paralyzed from the mid-chest down. He will probably never walk again at the age of 18. Sad for certain, but really I think this is more along the blatant lines of plain ole stupid on the part of the kid and his parents. Everybody needs to guard against such occurrences. 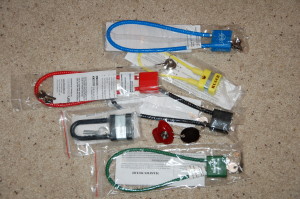 Home security can be accomplished as simply as applying the firearms lock straps that many manufacturers are now including with every factory boxed gun. These can be bought separately for older guns. Other manufacturers like Ruger for example are including specialized gun locks that when in place are very difficult if not impossible to defeat.

The primary downside to such cable or action locks is that they are key operated. This means of course, that the keys have to be in a place of easy availability. Each gun then may also likely have separate type locks that will have separate keys. This could get quite complicated if speed of access is a consideration. A system would have to be concocted to deal with this. Perhaps some kind of color coded tags?

And of course, the guns would still need to be secured or otherwise

If, and this is a big IF, the guns are only needed during an actual Bug In or Bug Out event, then the weapons can be secured more safely in a gun safe. This does not have to be a Brinks Security walk in bank safe, but anything from a common business steel supply cabinet to a full-fledged gun safe made specifically to lock guns up.hidden from plain sight. If the guns are locked individually, I could see putting them say on top of a closet shelf, but being locked up would be better. Guns could be stolen and the cable type locks could easily be cut off. A key lock door knob could also be put on a closet door as one mode to deter unauthorized access. However, easy access has got to be the big issue here. 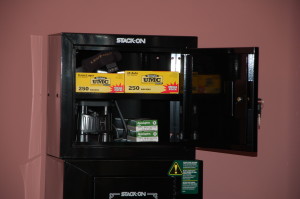 There are some very nice, well made, and highly secure sheet steel gun safes made by Stack-On that are quite affordable. They make many different sizes and configurations. These can and should be bolted to the wall studs or to the floor or both for added security. Stack-On gun security cabinets are key locked but some of the more upper end models will have advanced locking systems.

Of course full sized, heavy duty, channel steel, welded gun safes are made by many companies including Redhead at Bass Pro Shops,

Browning, Winchester, Cannon, and others. Some are even fire proof rated. Such safes can cost upwards of $2000 and more, but this is the ultimate in gun security. Their locks are usually electronic coded push buttons, or turn dial combination locks.

If there is an issue of having say one handgun easily accessible in the house, then there are also single gun lock up cabinets that function on finger press combination sequences. In the event of a break in or other disturbance the gun owner can quickly press a hand on the lock mechanism and easily withdraw a loaded gun.

There are many options available to keep guns locked and safe at the house. We just urge that you include such thinking in the overall development of your prepping guns security plan. Make sure the appropriate adults in the family also know the system and the plan. You may think that loaded shotgun leaning against the bedroom wall is a good idea, but be prepared to suffer the consequences if an accident occurs. 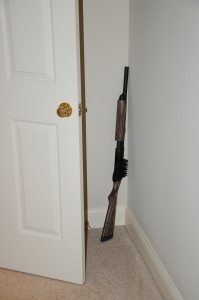 Remember, too, that according to traditional gun safety training, ammo should be stored and locked in a completely separate location. I’ll let you work this out to suit your plans and depth of security arrangements. Guns only work when they are loaded, so work out a system to keep magazines close by or in the gun perhaps with an empty chamber.

Keeping guns safe and secure during a Bug Out can be much more problematic. First there is the issue of maintaining control and access during the transportation phase from the main house to the Bug Out location. This may be coming out of a big city or suburb headed to the rural wilds, or leaving at night from home to a house or cabin in the country. It could be going from a rental apartment in a big complex to a wall tent in a national forest somewhere.

During vehicle travel in a Bug Out you are going to want your defensive firearm(s) at the ready. I have tried many different ways to do this and have not until recently been too comfortable with any of them. 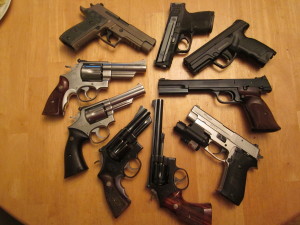 Belt holsters don’t work well for the most part unless it is a cross draw rig especially for a right-handed shooter in the driver’s seat. The side door compartment to the left of the driver seat can be OK, but sometimes there is a tight squeeze between it and the seat. Ditto the same situation between the driver seat and the center console. If there is no console then the handgun could be simply set down on the floor as a compromise. In either situation I recommend you practice drawing your gun from these locations in a vehicle.

I found the best case scenario for a quick weapons holster mount under the steering wheel using a Gun Creek Customs (.com) vehicle gun mount. This positions a nylon handgun holster right under the steering column for a quick, rather unobtrusive draw. Their mounts can attach either to the gaps in the under dash molding or using a strap fixture to wrap around the column. The holster is held secure for a positive handgun withdrawal.

Whatever you do in terms of in vehicle weapons security and deployment, be sure to practice it live even without having to fire out a window or door. Moving from an unarmed condition to a ready position is the key.

I have seen it suggested using a SBR (short barreled rifle) or a shotgun from inside a car, but I have never seen it work in real practice. A long gun is simply too wieldy to get to a ready position from inside a vehicle. If you anticipate a stoppage or event up the roadway, then getting to the ready inside an open door could be done using the door as a shield. Practice this, too.

Firearms Security in the Field

Naturally I favor permanent structures for a Bug Out location over a camping tent. An RV hard sided trailer would be better than a thin fabric Alpine tent in terms of security for both firearms as well as inhabitants. But use what you have and plan accordingly for all contingencies.

Again access is the most important element as well as guarding against unauthorized tampering in your absence. Out in the wilds either camping or living in an alternative home or cabin many preppers likely intend to keep a firearm on their side or a long gun nearby. I guess it all depends on the relative threat in your area.

For security in a hard structure see section above again for Bug In conditions in terms of weapons security. If you don’t have a hardened dwelling or a sturdy out building, storage shed or something similar, then you have to work on a plan to secure and protect valuable weapons and supplies from unwanted access and the outdoor environmental elements.

There are some portable carry, lockable, metal gun cases like safari cases that can yield a measure of security out in the field. Just work out a way to keep these covered and protected from rain, snow, and such. Few things foul up firearms quicker than moisture. Just keeping them in the back of a contained vehicle might be an option. Lying on the floor of a tent might not be.

Individual firearms could be cable locked as suggested for Bug In conditions when these tools are not in immediate need of use. Survival vaults, tubes, or containers that could be buried, or just hidden nearby could be another option. These need to be waterproof and sealable from outside contamination.

As one might well imagine, this discussion is endless. Everybody’s situation is different, but if you have weapons in the mix, then security and protection of these value assets is essential. Just put it down on your “to do list” to work on a strategy to secure weapons for a Bug In or a Bug Out option.